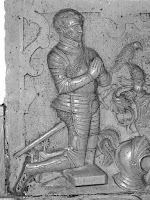 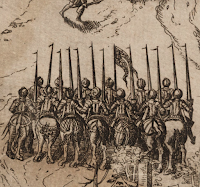 Valete
ps
all armor images are from Wiki Commons and these examples represent 2nd half of the XVI century uppermost crust of chivalry and armored horsemen. such armor could have been used by the winged hussars, be it in Polish-Lithuanina Commonwealth or Hungaries.
Posted by Dario T. W. at Monday, March 25, 2019

Dario, thank You for new unknown author, do You also plan to get his first book? https://www.amazon.com/Certain-Discourses-Military-Documents-Civilization/dp/0918016398 My colleauge can use this for research about 30 years' war, and I will enrich my knowledge. I always thought, that we have and we know all primary military sources for European Medieval, Renaissance era, Thirty years' war, but there are still new things like this https://www.kosmas.cz/knihy/211058/historie-zivota-albrechta-z-valdstejna/

Recently I've read https://www.amazon.com/Culture-Society-Modern-1740-1849-Empires/dp/0415587670 extremly good and important book, how was India conquered (from the view of Indian states), why Mughals and other faded away. In the beginning is comparsion of Indian, European warfare. I discovered new, interesting source for 30 years' war https://en.wikipedia.org/wiki/Raimondo_Montecuccoli Do You know him, or will You post some article where to get his writting (stangely combined memoirs/tactical book)? This guys had some impressive theoretical ideas. If You read Roy with combination with this title https://www.amazon.com/Islamic-Gunpowder-Empires-Ottomans-Safavids/dp/0813313597/ You will have Your answer, why armies based on mountead archers dissapeared. Especially Roy is superb in thinking this problem trough.

I can also recommend Osprey book for unknown Khazars https://ospreypublishing.com/the-khazars first book after decades! I'm planning to read more about Mughals, Sasanid Empire and this title is forefront in my list of books to read https://www.routledge.com/The-Eurasian-Way-of-War-Military-Practice-in-Seventh-Century-China-and/Graff/p/book/9780415460347

I'm looking forward for Your another posts and paintings!

Pavel, u la la - what a list of books to read and study - thank you for the commentary
I am in the holiday mood, so for now
I wish you
Happy Easter and smiling Smigus Dyngus (Wet Monday) -
ahoy