Salvete Omnes,
a short entry -
the Cowboy Mounted Shooting is a competitive sport event associated quite a bit with historical reeenactment of the XIX century American West and Western movies, being a spectacular  display of American Western Horsemanship and love and handling of firearms, thus requiring quite considerable amount of preparation of on the part of horse and rider.
This equestrian sport is becoming a popular activity, and events are spreading throughout the country, getting coverage on major sports channels etc.
They promote American history, horsemanship, love of the American Western traditions, knowledge of firearms and their handling, and the special horse-rider relationship - what a mixture one may say
Participants, both women and men, belong to the two major organizations:  Mounted Shooters of America or Cowboy Mounted Shooting Association. 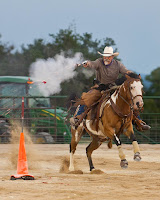 I think I am going to give a try one day - :)
Valete
ps
pictures are from Wiki Commons, but there are tons of photos and videos on the web
Posted by Dario T. W. at Friday, March 08, 2019