Salve,
last month I finished the series of plates for the new edition of '' Lubieszów 17 IV 1577'' (the battle of Lubieszow 17th April 1577) written, or ew-written by Radek Sikora.

The new edition (the 1st one was published by Infort Editions in 2007) to be published by Erica has been updated with more primary sources,  especially a Latin source first time in Polish,  and other stuff (I admit I have not read this new one yet), and will contain some 26 black and white plates drawn by yours truly with the Gdansk and Royal soldiers (some plates consist of the older illustrations already published in 2007 but remastered and with additional drawings or details from period prints on each plate).
The battle is famous in the history of the winged hussars, but also in the history of the Polish-Hungarian hajduk infantry. 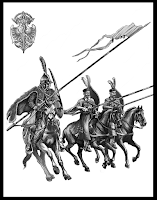 I am not sure when the book will be released in Poland,  it was supposed to have been released on or about the battle anniversary - April 17,  but it may be delayed. I will share the info about the release date as soon as I will have known it.

also my never-ending Ottoman delil sketch, a version in progress of sorts 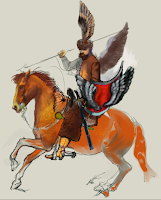 enjoy
ps
The Coptic Christians in Egypt were murderously attacked last Sunday which was the Palm Sunday. US and EU media   etc offered little if any mention about the atrocity carried out by the Daesh/ISIS and their henchmen.
Piers Morgan posed a question, on Fox News, why the coverage was so timid