Salve,
yesterday I wrote about  visiting the Slav and Viking Festival in Wolin, Polish Republic. I met there Mieczyslaw Mietko Machowicz from Kalisz, Poland, who leatherwork master and historical leathercraft reconstructor and researcher.
In his tent, along with many different examples of his craft and various leather and hides for sale, he had several interesting examples of horsetack and several saddles.

The saddle that brought my utmost attention is this one, from Wieluń in Poland: 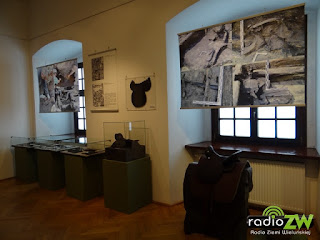 Article about the exhibit in Wielun, including a short information about this saddle, and many photos from this exhibit.

The historic saddle reconstructed by Mietko was excavated during the archaeological excavation in Wielun, Poland. According to the maker, the saddle has been used while riding, on the Polish 'konik' and with plenty of comfort and safety.
Below find some photos of this historic reconstruction.


so as you can see the saddle appears to have been a riding saddle, not a lancer war saddle, but it could have been used by the crossbowmen and squires too.
and one of my most favorite saints always on horseback - St. Martin in a painting from late XV century Kingdom of Hungary 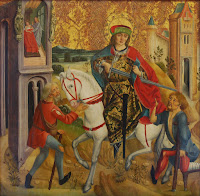 ps
when I opened the photos I realized that I had not taken any shots of the saddle tree alone, and no shots of front and rear arches (pommel and cantle).
Posted by Dario T. W. at Tuesday, August 09, 2016