Salvete Omnes,
we marched in Warsaw this afternoon - I rode with the Vistula Lancers - thanks to Krzysztof Komaniecki, Vistula Lancers, for all his help and support!
Also Darek Senator - wielkie dzięki! And Marek Drabik too!
a short video via YouTube
another one here - reenactors start at 29th minute
enjoy 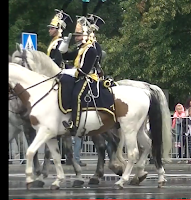 ps
Arsenal.org.pl is collecting money for a historic plaque to be placed at the Chantily Castle commemorating the Polish Lancers of the Guard stationed there during the reign of Napoleon I, emperor of the French.
I finally met Marcin Piontek from Stowarzyszenie Arsenal  who commanded a small unit of the Polish Guard Lancers at this event.
Also, I met in person Michał Sanczenko, who rode as a winged hussar in this parade.
Posted by Dario T. W. at Monday, August 15, 2016

A very good set of photos of the soldiers and reenactors 15.08.2016 http://jimixphoto.com/reportage/#/polish-armed-forces-day/