Salve,
this weened thousands of reenactors and spectators from around the Europe and perhaps the world celebrated the 200 anniversary of the Waterloo campaign. 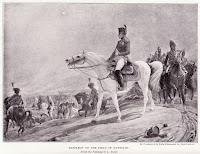 I have never been a Napoleonic reenactor, but I do love seeing these painstakingly reconstructed uniforms, arms, horse tack and other equipment of this colorful period; it makes my day to watch - via videos and photos -  the men and women (some on horseback) marching, camping and fighting mock battles from the Age of Napoleon.
Hence, I think this great gathering of Napoleonic reenactors  in Belgium will be remembered as yet another triumph of the reenactment movement in Europe,  and the very fine occasion to cherish the martial traditions of Europe. 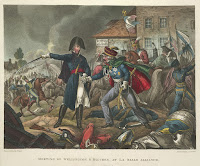