Salve,
continuing from yesterday on the theme of winged hussars circa 1770, I copied, with the addition of  boots and left arm - the Osprey Polish armies winged hussar as it appears on plate B in the book. 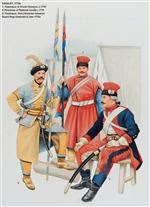 The author of the Osprey book,  Mr. Vincent w. Rospond, called this soldier from the above plate a 'Towarzycz* of Crown Hussars, c.1770 ( nota bene painted by Raffaele Ruggeri).
He goes on explaining that ''towarzycz*'' was a 'comrade', 'typically riding in the front rank with a lance.'

The description of the uniform:  'a tall quilted cap [...] had a red top. The comrades had  a medium blue zupan and facings. [ Presumably, as firstly the author describes an officer not shown in the plate, they wore a   'red kontusz -an over-jacket with split sleeves- lined in white' over their zupan but again in the text this part seems to address only the officer's uniform].  This lance pennant is halved in the uniform colours, red over blue. Waist sashes at this period were usually fastened by being wrapped around themselves' on the left side.'
Author even writes about the 'saddle cloth, it being red with blued edging,' although there is no saddle nor saddle cloth visible in the plate (page 44-45)
My most important question about this reconstruction is with the depiction of the kontusz -  I have not seen this closing of the kontusz over the chest in any period art dating to XVIII century! By the way scholar Irena Turnau, in her book 'History of Dress in Central and Eastern Europe from the Sixteenth to the Eighteenth Centuries, Warszawa 1991,' gives the following definition of kontusz - an outer caftan worn on the zupan. The cut was characterized by the back being formed down to the waist from a long rectangle of cloth, to which wedge-cut sides were added. The sleeves, slashed  from the armholes to the elbows and thrown to the back, were called 'wyloty'  and 'łapcie. '(Turnau :162)
Also, the curious additions are two additional elements of his attire: the use of gloves and the 'pendant' across towarzysz's chest.

In order to see a beautiful example of period Polish nobleman attire one has to look at  the drawings and paintings of  Jean-Pierre Norblin de La Gourdaine, whom we call Jan Piotr Norblin in Poland :)
Here a great depiction of a nobleman national costume:

Depiction is finalised with an attribution of the source - the figure is based on a painting by Canaletto (Bellotto) in Anusiewicz.
Now this Anusiewicz is a curious one - the  Selected Bibliography on page 43 lists the following title;
Anusiewicz, Marion*(ed) & Bronislaw Gembarzewski , Zolnierz polsk* od 1697 do 1794 roku (Wydawnictwo Ministerstwa Obrony Narodowej; Warsaw, 1963)

This volume, number 2 of the series devoted to the history of the Polish fighting men from XI century to 1960, is always cited as pan Bronisław Gembarzewski's work - eg World Catalog
Also, the name for  'comarade' spells 'towarzysz' in Polish and not 'towarzycz'
- more to come :)
*original spelling
Posted by Dario T. W. at Saturday, December 07, 2013