Christmas is coming and so are the Parthians - :)

Salve,
a couple more days and the great holiday will begin, with us Poles around the world, some 50 million souls :) and hopefully growing, it begins with Wigilia or Christmas' Eve.
When I think about Christmas in historical sense, apart from the Jesus and His family, king Herod and recounting the story of Flight into Egypt etc,  I always think about the Parthians  too.

(note the bridle and curb-bit on the donkey in this beautiful painting by Carpaccio)
Why you may rightfully ask. Well, usually because they sat there beyound the Euphrates Rives across from the border of Roman East, looming large in the trade (spices, incense, slaves, silk and horses) and cultural exchange of the region. Ever since Herod broke off his relationship with the Parthians, executing Hyrcanus, the last Hasmonean, while preserving his throne and gaining a modicum of grace with Octavian Augustus,   Parthian kings could have their armies visit this particular Friend of Romans, and bring chaos to Herod's petty 'kingdom'.

Instead The Magi (Three Wise Men of the East) came to visit newly born Jesus in his temporary adobe in Bethlehem, and later mercenary Parthians and Arabians of the army of king Herod hunted after the Holy family and killed infant boys in an even known in the Gospels as the Massacre of the Innocents.

So I decided to sketch a new Parthian for my collection of Parthians :) -
first I started reworking my older sketch 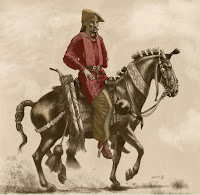 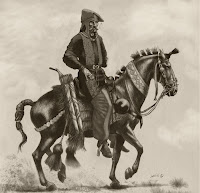 .
Then sketched a generic rider and his mount 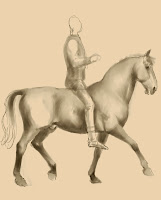 From this I will move forward time permitting
Posted by Dario T. W. at Sunday, December 22, 2013