Salve amigos et amigas,
it is raining outside, I guess good reading weather...
this morning I decided to change a bit the info in the heading of this blog. I enlarged the time frame of my blog, changing it from - the end of the Indian Wars (in North America) , to this new date - AD 1939.

I have been using texts and images that go into XX century, and also in our so called Western Civilisation  the sad year 1939 was the terminal year of gentry living in Europe. Everywhere, but for Spain, Portugal, Swiss Union, and Sweden raged relentless war, World War II, that brought the end of the gentry and their way of life - with fine estates, horses, dogs, servants and chivalry that would become buried under the piles of dead Europeans.
In our parts of the woods, Central and Eastern Europe, the old class was obliterated with the particular zeal by the Communists and Nazis alike. In Poland particularly during the first 2 years of war the joint occupiers (remember Ribbentrop-Molotov Pact),  killed Polish gentry and intelligentsia with gusto and relentlessly.
It is not an accident that the killers, Nazi and Soviets, killed gentry class, they had designs for this monstrous and momentous change in Eastern Europe and as you know they carried their designs, including heinous removal of European Jewry. For centuries it was the nobles,  this landholding class reaching far into the Dark Ages with their ancestry, that protected the Jews in our part of Europe  from excesses, be it  the Cossack fury or bigotry of townspeople.

Hence, I think it would be appropriate to include some talk about the gentlemen and gentlewomen of 1920s and 1930s, as in fact they were  part of that great equine-based culture started somewhere during the Bronze Age on the Eurasian steppe.
I should mention that while visiting Poland I bought this fantastic collection of books dedicated to the Polish cavalry regiments between 1914-1938. It is titled ''Wielka Księga Kawalerii Polskiej 1918- 1939'' (Great Book of Polish Cavalry) and I got some 40 volumes (Osprey Military Publishing style) full of period photos, illustrations and interesting text. The series is on going, and more books are expected, I am awaiting the volume on the so called military horse of the 1918-1939 period, as some of my ancestors bred horses for the Polish cavalry - :)
Until the next time then... 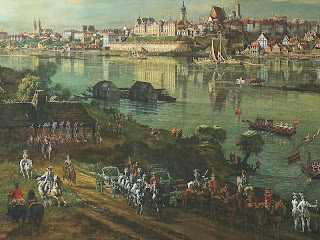 Above, a detail from a 1770-2 painting by Bellotto showing Warszawa's left bank across  Vistula river: amongst them Royal Castle and Old Town etc. A troop of cavalry, Royal Uhlans with long lances,  is coming towards the viewer, while we are treated with a detailed look of the Royal entourage, carriages with matching teams, and amongst the officers, adjutants and servants etc there are king's hussars. The description in Polish here
Posted by Dario T. W. at Thursday, November 07, 2013