Salve,
last month I talked about visiting Wrocław in October and among monuments and museums seeing the Museum of Racławice Panorama (here the entire painting). Bellow, a real peasant wagon  placed along with the ground and vegetation all along near the foot of the painting, to create the illusion of three-dimensionally. The illusion works pretty well -:)

Well, I would like to start showing my photos of this masterpiece, its painters and the events taking place on canvas, as this is a historical piece describing some of the vents that took place during the battle of Racławice, AD1794..
First, the battle in period art
by Aleksander Orłowski, participant of the Kosciuszko Uprising
. 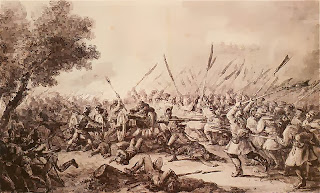 Michal Sachowicz, contemporary artist and witness to the Uprising
.

.
perhaps it would be nice to start this topic with a little history on how it all came about:
our Polish painters Jan Styka  (who came out with the idea in 1892, 2 years before the centennial of the Kosciuszko Insurrection)) 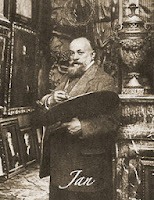 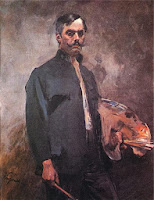 Wojciech Kossak  got together to paint this cycloramic painting, being influenced by similar works painted by the Germans ( Anton von Werner  in Berlin,) and the French (Alphonse de Neuville & Eduard Detaille in Paris - example of battle of Champigny from gallica )  during 1880s. Also it is very commendable and perhaps astonishing that  the Committee, for the Austro-Hungarian State Fair  to be held in Lwow (Lviv)  in 1894, quickly came about having a design made  and construing the necessary building in Lwów.
Munich in Bavaria was another center for fine art at that time, and both our painters went there to study the art of painting the panorma. Also they had to order necessary and specially woven canvass (as always from Belgium), study or ask around the circle of miltiray hsitorians about the period uniforms and wepaons, study period art, and visit the locality, i.e., Raclawice village.  Kossak painted 4 large oils (1: 10 scale of the original size, they became known as Mała Panorama Racławicka bought by prince Adam Sapieha for his Krasiczyn castle ) in April 1893, and Styka took two of them to Lwow to finish them while Kossak took the remainder to his atellier in Krakow. In July 1893 the building was finised and canvas was streched, all 120 meeters long and 15 meters high.
The research for the historical accuracy led them to the Vienna war Office archives where they found a plan of the battle, drawn shortly after the engagement in 1790s.Then Styka, Kosska and Ludwig Boller(from Munich) went to scout the landscape near Racławice, and made landscape sketches.  Two historians, Tadeusz Korzon , who finished then a new and monumental biogaphy of Kosciuszko, and Konstanty Górski , military historian, aided them with historic information. also museums in Krakow, Lwów and other private collections around the Austrian Poland (partitions of Poland  ) were opened to them to allow for study of the art and material history of the Kosciuszko Uprising.

Our two principal painters chose painters to assist them in painting this behemoth: Teodor Axentowicz, already mentioned Ludwig Boller, Tadeusz Popiel, Zygmunt Rozwadowski (great painter of horses), Michał Sozański, Wlodziemierz Tetmajer and Wincenty  Wodzinowski. They got to work and worked hard , with many conflicts between the principal artists.

As art historian Kazimierz Olszanski, great biographer of Kossak family, writes the work assignment etc was as follows:
Jan Styka was the mastermind of the project and one who organised it. He painted the praying group, woman with the killed husband before the hut, the mounted figure of Kosciuszko; and with Wlodzimierz Tetmajer he painted 'kosynierzy '(scythe-armed peasant levies) attacking the cannons and troops of regular Polish infantry and peasant levies marching to fight. Wojciech Kossak painted 70 % of all figure composition of the entire panorama (he also painted the horse for mounted Kosciuszko painted by Styka) The landscape was painted by  Ludwig Boller  and Tadeusz Popiel. Following Kossak's sketches Teodor Axentowicz painted the infantry of Wodzicki regiment of foot while Zygmunt Rozwadowski National Cavalry regiments. Periodically Wincenty Wodzinowski and Michal Sozanski helped to paint various scenes.

After 9 months they finished  on May 28 1894, all the rest was added and synchronised with the painting  within a week, and on June5, 1894 the panorama opened its doors for the visitors.

Interestingly enough the painting was to have a short life for it would have been cut into sections and sold off, as  most of these pre-cinematic works had been, but another painter Stanisław Batowski came its defence, and in 1912 city of Lwow took possession of the artwork, thus it became the main tourist traction for the city of Lwow and National Treasure of Poland
It survived the World War II, although the Germans tried hard to find it (it was hidden by patriots) and the Soviets agreed that the Polish authorities of Soviet Poland would take possession of this artwork (although countless other works taken from Polish museums and private collections stayed in Ukraine and her museums) was brought to Wrocław (Stalin took Lwow and gave us Wrocław I guess) in 1946, where finally the Communists allowed for the new rotunda built and painting restored.
The newly restored Panorama was opened for visitors in 1985 and continues to draw crowds from all over Poland and abroad.

Anecdotes are always interesting - so there is one
After the work was complicated and prises sung, the conflicts between Styka and Kossak grew as to the authorship of the project, and continued for many years.
Writer Tadeusz Boy-Żeleński wrote that Jan Styka was not really the one who 'pinxit' but the one who 'combinavit,' and so many words it was Kossak who who 'pinxit' most of it.  Tetmajer  used to say, Boy-Żeleński added, that when he just finished a section of panorama and paint was still wet, Styka would come in with the visiting officials or sponsors and show them the very piece as his own. But to Tetmajer  it was just funny or annoying,  but when Styka tried to do the same to Kossak ,  show his still wet work as his own,   he even chased him across the scaffolding with intent to cause bodily harm, being himself rather temperamental. Several times the said  Committee had to devote a session to these quarrels and one of the official notes stated (October 11, 1893) the names of the creators would be listed in an alphabetical order. It did not help much
The quarrel never really ceased between the artists,  and lived on after 1894, and actually Jan Styka's sons continued with it.
Both artists went to paint more panorama paintings, Styka 2 more while Kossak 2 more as well.  Theses hudge paintings were cut and sold off as smaller pieces.
. 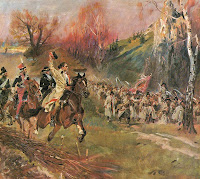 Kossak painted this picture later on, after the Panorama, circa 1924
.
to be continued
.