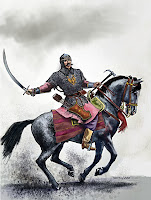 Salve,
on Polish history forum one of the users, nicknamed after a great Polish warrior of the XVII century Hieronim Lubomirski, provided a link historycy.org byczyna  to a fragment of the 1980s Polish TV series titled 'Kanclerz' (the Chancellor) where this intesting battle Polish-Hungarian-German has been depicted - here is the link - Byczyna

Please do note this is a TV film and it does have all the shortcomings of such non-historic media presentation, with all the multiple faults and omissions present, i.e. too short lancers, winged hussars charging as if a mob of hunters and steeplechasers etc. But it offers a feeling of how winged hussars, post-Stephen Bathory reforms, might have looked, and the foggy nature of the weather in the film is a nice attempt to show the actual conditions of the Byczyna battle. Actually this film, made at the end of the Soviet Poland is not a bad work,  and perhaps not as puffed up as a period work by one Polish film director who did 'slaughter' Sienkiewicz's 'With Fire and Sword.' http://en.wikipedia.org/wiki/With_Fire_and_Sword   wiki/With_Fire_and_Sword film

This was one of the more curious battles of the Polish XVI century warfare, but for now please let me leave it at that.

The image above - some time ago I showed some very old drawings of mine here, one of them   old-watercolor-pen-ink-old I  was intended to show Polish pancerny (medium cavalry) of the Deluge en.wikipedia.org Deluge history and King Jan III Sobieski's  era,  and today I had some time and so I worked on the old drawing (ink and watercolor) with GIMP and MyPaint.  I hope the  results are evident - although more work remains to be done  - :)

ps You can view the clip at Kadrinazi's blog as well  kadrinazi.blogspot.com husaria byczyna
Posted by Dario T. W. at Wednesday, December 08, 2010

Ekhem, I posted that clip from Youtube in June on my blog ;)
http://kadrinazi.blogspot.com/2010/06/przerywnik-filmowy-husaria-pod-byczyna.html
It's really nice, even though didn't show much battle.

Marvelous piece Dario - I daresay one of your most beautiful :)

sorry, I did not see that one at your blog -
Pancerny still in making, I suppose

I was just laughing with that Byczyna - after all clip is on Youtube, anyone can find it.

That battle is really interesting, especially when one looks into composition of fighting forces. Are You planning any drawings showing soldiers from that battle?
Here You can find details ODB from this battle:
http://www.strategie.net.pl/viewtopic.php?t=5732
What is surprising - Hungarian infantry in Maximilian's army using pikes ;)

Well, ture Byczyna youtube is a bit humourous.
The battle of Byczyna is on my list, to write about and illustrate some of the men and horses fighting and dying there, perhaps women too.

I just copied that list, I have Plewczynski aricle but the list is great and will translate it into English, 'et' now I have to draw some soldiers and warriors of this Battle, including wounding of Żółkiewski, great chancellor Zamoyski on horseback in armor and perhaps infamous Sadnicki.

Dario, I would say it will be great if You could also draw famous Gabriel Hołubek:
http://kadrinazi.blogspot.com/2010/07/nasz-to-polski-kurcyus.html
:)

yes, I forgot about this gentleman - sir Gabriel Hołubek (Hawryło Hołubek) - thanks for the link to your post on your blog, I will definitely try to show him too.
But I have to figure out how to compose an outfit for a light cavalry (kozacki) officer...
By the way I am itching to write and draw the most forgotten XVI century Polish scourge of the Tatars and zagonczyk- sir Bernard Pretficz (B. Pretfic), circa 1500 to crica 1563, well perhaps one of these days