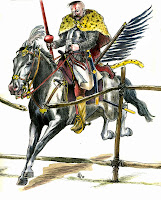 Little change of time and subject - Polish winged hussars against the Western and Muscovite armies during the early summer of 1610. This was the most glorious Polish Commonwealth victory ever accomplished against the Muscovy ( Tsar(emperor) ruled State of Muscovy later to be named Russia ).

In my opinion (and many others) from the position of the cavalryman and cavalry historian the most interesting part here was the apparent necessity to charge and destroy wooden fences separating the opposing armies, the destroying being done by the horses themselves, using their hooves and breasts/chests.

Pleas note that I am not going to write the story of this battle - Wikipedia has the intro to this Polish-Muscovite war that is not too bad and an entry on the battle itself but numbers are wrong etc, yet it is not my desire to write about the numbers but about the cavalrymen and their horses http://en.wikipedia.org/wiki/Battle_of_Klushino

Some say there was a redoubt between the armies - actually during the battle of Klushino there was no Swedish-Muscovite redoubt - this 17th century map of the battlefield gives the best impression how this theatrum might have looked http://upload.wikimedia.org/wikipedia/commons/7/77/POL_K%C5%82uszyn_1610.jpg
As you can see from this map the problem facing the Polish army (and the winged hussars) had to do with the wooden fence or line of wooden fences smack in the middle of the field between the two armies, and these fences actually prevented the planned surprise that had been attempted by the early morning Polish attack.

There were gaps within this line of fences (10-15meters) and according to numerous relations about the battle some of the Polish hussars had to use their horses' breasts to break these fences in order to get to the enemy behind them.
Apparently the fences on the left wing of Muscovite side - Polish right wing - were smaller and with more gaps in-between or were torn down early in the battle as the chroniclers did not write about them, although they are visible on the map and in this painting by a Polish painter Boguszewicz who painted this canvas at the order of the m,ain actor of this battle, Stanislaw Zolkiewski. http://pl.wikipedia.org/wiki/Plik:Klushino_1610.JPG
The Swedish pike-and-musket infantry stood behind these fences (with their cavalry behind them) on the Muscovite right wing while masses (thousands) of Muscovite infantry and Muscovite cavalry stood on the Muscovite army left wing (Polish right wing).
Hussars charged these western infantry regiments via the fences, not once but at least 3 times, and then Polish haiduks (Hungarian-style Polish infantry) with 2 small falconets (it happened to have been the entire artillery of the Polish army) came and broke down the wooden fences and reduced the fighting spirit of the Westerner infantry mercenaries causing them to move rather quickly (not to say they 'run like frightened rabbits') toward their camp, although still leaving their cavalry in the field.

Therefore, Polish hetman (field marshal) Zolkiewski had to resolve this dangerous problem by clearing the Western cavalry off of the field and destroying the right wing of the Muscovite army. Consequently the Western cavalry regiments became objects of another great cavalry charge. At first, our Polish hussar banners (companies) carried out the frontal attack on the Swedish-English-Flemish reiter and arquebusier cavalry regiments, in their pursuit to destroy the remainder of the Muscovite army's right wing. The hussars' frontal charges were not successful (perhaps the great disparity of numbers and densisty of the Western cavalry formations) until the Muscovite infantry protecting their (Western cavalry) left flank had been removed (see below) and then another, final charge was made that was carried in a form of a pincer movement - at the front and at the left flank of the enemy cavalry, by some 1200-1400 hussars (1/4 of the entire Polish army on the battlefield), some with lances, the rest with tucks (pantzerstrecher, 'Turkish spear' or koncerz) and pallashes. They charged these Westerners an this time were successful. This final hussar charge against their western opponents broke the cohesive formations of the enemy and thus hussars were able to overrun the Western cavalry and destroyed its fighting ability for the remainder of the battle.

Following behind and finally passing over their heavy cavalry's tired horses the several banners of Polish lighter cavalry went after the Muscovite westerners in their pursuit for glory and loot.

On their right wing our Poles, charging repetitiously - as many as 8-9 times (but whether they charged only infantry or both the infantry and cavalry is unknown from the sources)- hussars' choragwie (companies) could not break the Muscovite infantry due to their numerical strength, density and truly amazing 'stubbornness' until several cornets of German Muscovite reiters ( Baltic German units in Muscovite service since mid 1500s) attempted to charge the already tired Poles (ridding their tired horses). These brave but rather foolish Germans, however, were beaten back and completely routed in turn, and ridding in panic, back to the safety of their camp, these German-Muscovite reiters smashed into their own Muscovite infantry regiments, causing them to be disrupted. This disruption was big enough that when our Polish lancers, charging for the 10th time and hot on the Germans' backs, closed in with the Muscovite infantry the infantrymen broke ranks and fled ( classical example of successful cavalry charge against otherwise unbreakable infantry ). Thus exploring this sudden opening our pursuing hussars rode inside the walled (kobylice protected) Russian camp and broke the very will to fight of this many times more numerous Russian army whose escaping infantrymen, eager to put plenty of space between themselves and then mercilessly pursing Polish lancers, broke down the kobylice protections in their own camp's rear and fled into the surrounding woods, in search of safety and respite.

Finally, the previously mentioned Swedish mercenary infantry retreated from the field to their camp in search of refugium and found itself to be quite alone, for their cavalry was defeated and escaped into the woods and fields desirous to save their heads; and it was at this moment when the hussar rota (company) of Andrzej Firlej ( their towarzysze and pacholiks still armed with their lances unbroken ) attacked this mercenary camp. With their charge they first broke through the kobylice barrier surrounding the Swedish camp and then in a direct, frontal charge broke through the Swedish pikemen formation - an incredible feat of military skill and prowess displayed by these horsemen and their horses.

Thus these mentioned numerous charges had more to do with the strategy of hetman Zolkiewski - and he actually wrote about this in his relation in his work titled
"The Beginning and Progress of the Muscovy War."- who wanted to keep constant pressure on the very numerous and very resilient Muscovites, and to create impression that his army was more numerical than actually presented on the battlefield. This stratagem worked very well and resulted in a stunning victory for small army against the giant Muscovite_Western behemoth.
It was the skill, the horsemanship, bravery, and superior morale of Polish lancers, endurance and patient training of their horses, and finally the tactics and strategy of the Polish commander, Stanislaw Zolkiewski that carried the day into history books :)
hope you will enjoy this little post
more to follow
many thanks to Radek :)
Posted by Dario T. W. at Sunday, April 26, 2009

Indeed an incredible achievement by the Polish hussars.

However, the breaking of the pike phalanx at the end of the battle by the hussar, although it might sound incredible at first, was not a supernatural achievement. Infantry that has been exhausted and had their morale shattered by the sight of their mounted comrades fleeing in a panicked rout were routinely broken by determined cavalry charges during battles in the 17th and 18th century. Then it became a question of morale instead of physics - the footmen threw down their weapon and ran for it, allowing the victorious horsemen to slaughter them at will. Dutch cuirassiers completely destroyed veteran Spanish lancers and pikemen on their own at Turnhout in 1597, with very little losses themselves. Examples of extraordinary resistance by infantry abandoned by their cavalry existed, such as the Swiss at Dreux in 1562 and the Spanish tercios at Rocroi in 1643, but note that in both battles the majority of the foot were routed after losing their cavalry support.

All in all after the 'infantry revolution' concept in the 16th century, European cavalry undergoes a revolution as well a bit later, and would continue to dominate warfare until the 18th century. Even during the Napoleonic period having cavalry superiority often guaranteed victory.

Hello John, you know you are right - and God willing I will get to those Spanish-Dutch wars, thanks for reminding me about them - Turnhout is on my list, I have been studying the arms and armour of XVI century, so things will appear. Do you have a good book to suggest on this battle?
Early modern cavalry and infantry - there seems to have been waves of sorts (eg English seem to 'gloat,' judging from number of books on the Civil War and absence of real good military hisotry books on the XVII century European continent wars, that English Civil War 're-invented' cavalry charge at canter and even gallop while on the continent cavalry banners/companies galloped to war without any knowledge of this invention - I guess it is a matter of perspective), all the way until the firepower made later XIX century cavalrymen into dragoons, thus eg 1939 Polish uhlans or Wermacht horsemen were just dragoons in the way they were intended in XVI century - infantry on horseback.
Thanks again and keep commenting