Salvete Omnes,
on the eve of the Polish Independence Day - I hope the Warsaw Marsz Niepodleglosci  , taking place tomorrow in Warsaw, will be peaceful and joyful to all participants and the police forces providing security. 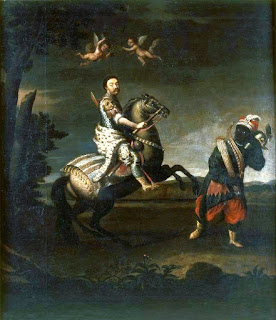 The government officials representing the Polish peoples (the Respublica's Treasury) bought the entire collection from the Czartoryski family for a hefty sum of money. It was well spent money I daresay. The Czartoryski collection has become the permanent part of the National Museum at Krakow.
Lately the National Museum at Krakow has been digitizing and making the digital copies available on their site.
and this very painting has been digitized - here.
The fantastic digitizing allows for some nice closeups and plenty of study here. eg 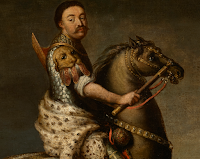 The painting is the apotheosis of our famous warrior, pained after a much larger painting showing Jan Sobieski victorious at the battle of Chocim 1673 - fought on Nov 11, 1673. Pan Jan, coat of arms, sits astride his fine buckskin stallion(in many paintings Jan Sobieski, Janina rides buckskin horses, and Polish military men rode stallions or geldings)  holding the regimentum (marshal baton) (in this painting he is shown as the grand hetman of Polish Kingdom - here with a very ornate baton, when already the victorious king of 1683) is clad in the karacena armor and with the leopard skin wrapped around his hips. He carries a shield that appears to be a very antique type, sort of XVI century Balkan shield.
Jan Sobieski also carries under his thigh a very ornate buława or mace, sign of his office as the grand hetman and military commander. The head of buława is full of precious stones and is gilded.
The servant is carrying his winged hussar helmet, oriental recurve bow and a number of arrows with fletching done in the Tatar or Ottoman manner. 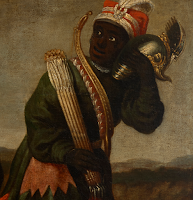 Note the horse tack - the saddle skirt done in the 'Sarmatian' fashion, ornate horse shabraque, metal breastplate, and elaborate bridle with a curbbit. Stirrups are after the Ottoman and Crimean Tatar fashion, and his yellow riding boots are without stirrups.

Valete
*
Murzynek - diminutive of Murzyn(masculine) -  which can be translated as black African boy- and it is no pejorative at all.
Posted by Dario T. W. at Sunday, November 10, 2019