while in Argentina
-he disembarked  in Buenos Aires  and traveled to Mendoza  , in a company of one more Englishman, 2 Germans in a two-wheeled carriage as seen in the prints below -
and across the Andes to Santiago,  Chile on horseback and mule-back. Then he took off to Valparaiso on horseback, and so on.
During his travel  he drew a number of images showing the daily life in the newly independent republics (although the open warfare against the Spanish possessions and their royalist allies was raging, including open warfare against the semi-independent Mapuche and other Chilean Indians too, known as la Guerra a Muerte) and Argentina  during the 1820-21: 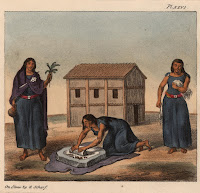 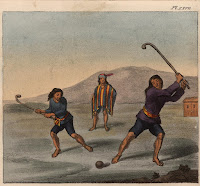 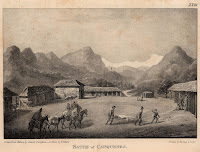 the actual book is accessible via archive world library. Nota bene the author did not see any beauty in the newly independent Buenos Aires, the town would become beautiful it is now much later on.
horses in his view:

mules and asses in his view: