Salvete Omnes.
a short entry - in a summer style one may say - the Archaeology News Network I read today that Salzburg Museum, Austria, will return to Russia 'a trove of ancient[...] artefacts plundered during the World War II.'
The ancient treasures were taken from the Temryuk Archeological Museum during the German occupation of the Taman Peninsula 1942-43AD. Perhaps some Austrian German officer, being part of the Third Reich conquering armies (Austria being the most Nazi of all the German lands during the Hitler's rule), 'conquered' these artefacts from the archaeological museum.
It took oh, 70 odd years to finally return these treasures to Russian Federation.
I am not sure if you remember but the Nazi Germans performed systematic, with the strictest scientific approach one may say, looting of cultural objects from private collections and museums in German-occupied Poland during 1939-45.
One of the artefact shows a horseman, and I think this a Sarmatian of the Bosporan Kingdom. 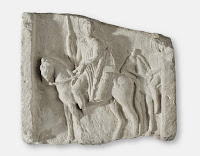 In many respects it is similar to the funerary stelae (Ic BC -Ic AD) from Panticapaeum in Crimea, that are on display in the Odessa Museum, Ukraine. 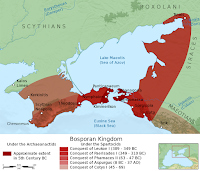 The country- Taman Peninsula and Kuban steppe to the south - over there in Russia has been the Tatar and Cossack country - it should come as no surprise that the original Cossacks were Tatars in the Genoese service during the colonial Genoese empire of the north Pontic shores  the XIV-XV centuries.

Wiki commons contains a large number of photos from the 'ethno-turist' center 'Ataman' that is 'recreating' a Don/Kuban Cossack  stanitsa (village). The place appear to be located in   Taman.  In some of the pictures there are modern Cossacks doing dzhigitovka.

https://www.nature.com/articles/ncomms14615?fbclid=IwAR1LivreHqSc1xGrtt9W_QbvUAio6XCqwUietsT-BHhqSASDJnHAHWgVVzA Ancestry and demography and descendants of Iron Age nomads of the Eurasian Steppe