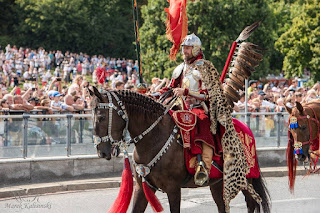 http://www.outono.net/elentir/2018/06/26/the-truth-about-poland-and-the-holocaust/
''The Truth about Poland and the Holocaust

In May 2012, during the imposition of a posthumous decoration on the hero of the Polish resistance Jan Karski, President Barack Hussein Obama used the unfortunate expression “Polish death camps” to refer to the extermination camps built and run by the Germans in the Polish territory occupied during the Second World War.

In recent years in the news, in the written press, even in supposedly specialized magazines, this misleading term has been used which is deeply insulting to the Poles, as it can lead to misinterpretations such it were the Poles the ones that built the extermination camps, or that Polish institutions collaborated actively in the holocaust. What is absolutely false, since during the period in which the holocaust took place, all the polish territory was occupied and administered by the Germans.

For this reason recently, the Polish Parliament approved a controversial law, possibly awkward and even inopportune, that even provides penalties for those who claim that the Polish State, as such, took an active part in the extermination of the Jews during the Second World War.''