Salvet omnes,
today the small village of Chroberz, Little Poland, is rather unknown and beyond the beaten path of the tourist traveler but  long time ago it was a lively place,  full of splendor and wealth, for it was  the residence of  Stanislaw Tarnowski  one of the clan 'members of the Tarnowski family, Leliwa Coat of arms.
The old glory of this place is reflected in the local church, founded by pan  Stanislaw Tarnowski who  was eventually buried there in AD 1568.

According to pan Paprocki's armorial, grandfather of our Chroberz Stanislaw was also named Stanislaw and he had been the fifth son of Jan, voivode of Cracow (however, a family tree where you can see that his grandfather was named Jan and modern genealogists agree with grandpa being Jan rahter than Stanislaw).
Following our pan Paporcki we read that his grandfather Jan, also a voivode of Cracow, and grandmother, Katarzyna de domo Ligęza, had one of their sons named Spytek, who was a voivode of Sieradz, Crown podskarbi (treasurer),  and a known warrior, Spytek had with his wife Barbara, de domo Szydlowiecka,  had two sons*: Wojciech and our Stanislaw.
Young Stanislaw went on a pilgrimage to the Holy Land, also visited Italy and the Holy Roman empire  Europe.
Pan Stanislaw was a voivode of Sandomierz and Crown podskarbi (treasurer) and one of the most important movers and shakers in the late Jagiellonian Poland.
He took as his wife Barbara, de domo Drzewicka, who bore him the following children: 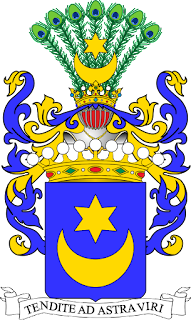 His widow had master Jan Michałowicz z Urzędowa built a beautiful Renaissance tomb effigy for her late husband in AD 1569.
***
The tomb sculptured figures placed within it designed grandeur, apart from their prima facie spiritual and religious significance -  Christ rising to Heaven, and apparent artistic value - Renaissance art, contain some of the interesting military imagery of the period, concerning the equipment of a wealthy warrior-nobleman and statesman.