Salvete omnes,
Dziady or Slavic Halloween feast [and All Saints Day too]  has passed already.
But in this gloomy November weather gothic stories may be more appropriate then other times...
So from time to time I read this very special Polish armorial harkening back from our own Polish  Golden (XVI) century, namely Bartosz Paprocki's Herby Rycerstwa Polskiego.(Wiki) . It is a lovely book and quite fine example of heraldic literature, not to mention a very interesting study of the Polish XVI century prose, grammar and orthography.

Inside, among so many stories and tales pan Paprocki tells us readers,  there is a story most appropriate for the 'dziady' feast, I think.

The story perhaps took place sometime during the  Crown of the Kingdom of Poland wars with the Turks and Tatars (1485-1503) when three Jagiellon kings (Kazimierz IV, Jan Olbracht and Aleksander) carried expansion policies into  Moldavia and southern Pontic Steppes colliding with the Ottoman Turkey, Crimean Khanate and Duchy  of  Muscovy plans and policies.
So perhaps we have here the events circa May 1498- November 1498, during the several deadly incursions, deep into Polish state, carried by the Ottoman Turks and their Tatar and Circassian and Turkmen vassals (nota bene perhaps some of the Turkmen horses were captured and added their blood to the Polish horse bloodlines).
These incursions were very large and inflicted huge material loses on the kingdom, while the invaders, going after slaves and plunder, murdered children and elderly indiscriminately, took many thousands of young women and young men (perhaps up to 30-40 thousands or more)  of southern Polish Crown lands into captivity (jasyr - yasyr) to be sold down south in Crimean slaving markets and Constantinople imperial slave markets (slave trade was run exclusively by the Ottoman Jewish slave traders -  Andrzej Dziubiński, Na szlakach Orientu. Handel między Polską a Imperium Osmańskim w XVI-XVIII wieku. Wrocław 1998. s. 210 ) more in these article a & b . 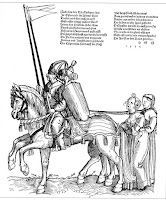 We are given but a glimpse into some unknown battle, very fragmentary one, and it is difficult to decipher what exact battle our illustrious author wrote about.
Paprocki wrote [and I translated):
Żołędziowie[1] [from] near Halicz in Red Ruthenia, were excellent men and of a house(family) well-multiplied; when the Turks were near Lwów (Lviv), [then] their ancestor (unnamed Żołądź),  having  learned that they had killed his brother, rapidly rode into the pagans' [lines], crossed arms with one of them, bravely unhorsing him with his lance, [and then] attacked another [Turk] with his sword, but suddenly a second Turk rode up to him from the rear and when Żołędź was raising his sword to strike the former, the latter ardently attacked him from behind and with his sabre decapitated him*. [ Thus decapitated Żołądź] rode without his head for about a half of furlong and [during this last ride] he three times waved his sword and finally fell off [his] horse.
The third brother, who was in the third polk[2] once given notice about his brother's death, having had with himself Zawisza of Sas clan  and they were a hundred horse[3] strong in this poczet (unit)[4], assaulted those Turks who had penetrated into the Christians'[lines], defeated them completely and [subsequently] adding more troops to his poczet he harassed  the Turks so since that time they [Turks] had not ridden with the Tatars into Poland anymore.

In Polish (original and the XIX century edition):

And so we have a headless horseman waving his sword fighting the 'infidel' (or a pagan) of pan Paprocki's times.

enjoy
*alternatively  : [and then] attacked another [Turk] with his sword, but suddenly this Turk rode up from behind(turned his horse so he placed himself behind the attacking Pole) and attacked [Żołądź] from the rear and when Żołędź was raising his sword to [strike], this Turk ardently assaulted him and with a saber he cut [decapitating Żołądź]. (but I prefer the first version)
[1] Syrokomla coat of arms
[2]  Old Polish military organizational unit
[3] third polk
[4] poczet - here a military unit, perhaps company?
ps'
thanks to dr Sikora for his help in reading the Old Polish.
Posted by Dario T. W. at Tuesday, November 07, 2017