Andrzej Pitynski - cavalier of the Order of the White Eagle

Salvete omnes,
Today is yet another celebration of Polonia Restiuta- celebration of 1918 rebirth of Poland  -  vivat Respublica Poloniae.
I believe that  one of the most important architects of this rebirth was Wincenty Witos (my grandpa was named after this peasant leader) - a giant of the Polish pre-1939 politics and one of the most famous and important Polish peasants ever. With the leaders like Ignacy Paderewski, Jozef Pilsudski, Jozef Haller, Roman Dmowski, Wincenty Witos, Ignacy Daszynski, Wojciech Korfanty, Jozef Rymer et al and hundreds of thousands or rather millions of Polish women and men they made this possible.
But it was a Polish peasant-farmer who made up the army and won the Independence in those great years of 1918-20.

... many winters ago I flew over the Atlantic and discovered to my utter amazement that I had next to me one of the most extraordinary artists and Polish-American patriots - pan Andrzej Pityński.
So I spent some 7 hours listening to a lecture on art, sculpting, history, politics of art making and selling, and horses and horseback riding.
Thus far it was for me the most memorable flight I have had over the Atlantic. 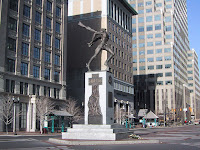 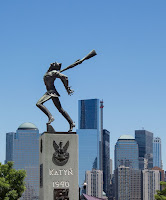 While living in NYC I saw pan Andrzej a few times at various Polonia functions, called and talked to him on the phone but we had never met for a little chat  in person again.
Today, on November 11, Polish Republic recognized pan Andrzej Pitynski merits, importance and achievements   and this this morning in Warsaw the President of Respublica Poloniae pan Andrzej Duda awarded pan Pitynski the Order of the White Eagle.
Congrats, panie Andrzeju!
Few works by pan Pitynski: 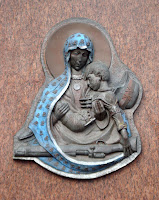 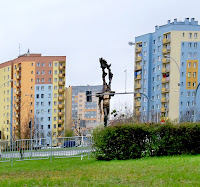 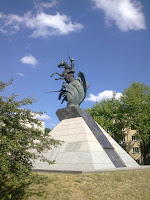 Too bad nobody commissioned pan Pitynski to create a monument to the Polish winged hussars - he loves and understands and knows the subject.
Another Katyn Massacre monument - in Baltimore

Pan Andrzej is the author of the Monument to the Book - in Lesko, unveiled in 2008.  A photo with some text here [in Polish] .
And countless other monuments and sculptures, in stone  and metals, and also he is a noted sculptor of medals and other forms of sculptural expression.
***


*
... do not forget - today is also the Veterans Day in the USA - hail to all veterans
ps
there is a book on Andrzej Pitynski's art - from Bosz -  Andrzej Pityński. Rzeźba (introduction by  Ireny Grzesiuk-Olszewskiej & Andrzeja K. Olszewskiego)
Posted by Dario T. W. at Saturday, November 11, 2017

https://www.flickr.com/photos/sheenachi/7556099108 another piece at Our Lady Shrine of Czestochowa, Doylestown, Pa