Salve,
we are going to return to the bison hunting in North America.
The story of Lewis and Clark Expedition provides the reader with many glimpses into the life of the Great Plains peoples, including the hunting methods and customs.
Today I would like to point you to the part where they describe the method of killing bison by stampeding them down a cliff - or so called bison jump - famous Head-Smashed-In Buffalo site in Alberta, Canada, and many others in the US. The method, if successful resulted in huge number of killed animals and many wounded and led to the extermination of the entire stampeded herd. In the days before the coming of the horse this was probably the most common technique used to secure large kills, perhaps the summer-autumn hunts when bison was in its peak condition.
In his paintings Alfred Jacob Miller gives us examples of this hunting technique - one here, and one below. He, however, left no written description of such event, only painting the scenes.
Interestingly the hunters are mounted in his works, whereas in the Lewis & Clark description the horses are not mentioned at all. It does not appear from the description that the expedition members witnessed such hunt themselves.

Lewis & Clark
chapter - UP THE MISSOURI
[p307-308] Near this spot are a few trees of the ash, the first we have seen for a great distance, and from which we named the place Ash Rapids [Drowned Man’s rapids]*. On these hills there is but little timber, but the salts, coal, and other mineral appearances continue.
On the north we passed a precipice about one hundred and twenty feet high, under which lay scattered the fragments of at least one hundred carcases of buffaloes, although the water which had washed away the lower part of the hill must have carried off many of the dead. These buffaloes had been chased down the precipice in a way very common on the Missouri, and by which vast herds are destroyed in a moment.
The mode of hunting is to select one of the most active and fleet young men, who is disguised by a buffalo skin round his body; the skin of the head with the ears and horns fastened on his own head in such a way as to deceive the buffalo; thus dressed, he fixes himself at a convenient distance between a herd of buffalo and any of the river precipices, which sometimes extend for some miles.
His companions in the meantime get in the rear and side of the herd, and at a given signal show themselves, and advance towards the buffalo; they instantly take the alarm, and finding the hunters beside them, they run towards the disguised Indian or decoy, who leads them on at full speed towards the river, when suddenly securing himself in some crevice of the cliff which he had previously fixed on, the herd is left on the brink of the precipice; it is then in vain for the foremost to retreat or even to stop; they are pressed on by the hindmost rank, who, seeing no danger but from the hunters, goad on those before them till the whole are precipitated and the shore is strewed with their dead bodies. 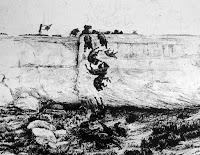 Sometimes in this perilous seduction the Indian is himself either trodden underfoot by the rapid movements of the buffalo, or missing his footing in the cliff is urged down the precipice by the falling herd. The Indians then select as much meat as they wish, and the rest is abandoned to the wolves, and creates a most dreadful stench.

The wolves who had been feasting on these car- cases were very fat, and so gentle that one of them was killed with a spontoon.

*originally the place was called Rapids of the Drowned by the French-Canadian voyageurs but when translated into English, it erroneously became Drowned Man’s Rapids, despite numerous deaths, L. Wischmann, Frontier Diplomat, Alexander Culbertson and Natoyist-Siksina’ among the Blacfeet, p 71