Salvete omnes,
summer in its foulness thus while you are on the beach or in front of your computer, it perhaps pays to visit the archive.org library, where there are treasures to be had.
I have not visited ancient Persia in a long time, therefore I would like to share with you some fine articles that you can read off the Archive library or download and read later on, whatever tickles your fancy.

Let me start with Josef Wiesehofer from Kiel University and his studies of the Achaemenid Persia - I like especially the one titled The Achaemenid Empire in the Forth Century B.C.E. - but there are a few more there and all are worth your while.
Nota bene I have finished listening, while driving, to a whole set of lectures by prof. K.w. Harl on the rise of the Kingdom of Macedon and Alexander's conquest of the known world - it was quite enjoyable and with plenty of newer scholarship( perhaps a bit too much about the otherness of the Macedonians when compared with the ancient alias  'poleis' Hellenes, and the way good professor pronounced the ancient Greek personal names was a bit tricky). However, I think the military information was too general, at times too vague and too short. On youtube there are other lectures by the good professor, search away.

Maria Brosius, New out of old? Court and court ceremonies in Achaemenid Persia (2007)- you can listen to an intro to the Near East ancient history - lecture given by the very professor.
Loyd Lewellyn-Jones,  King and Court in Ancient Persia 559 to 331 B.C. -  2013 [sic!]

a compilation of articles edited by Niels Nielding et al, Achaemenid Impact In The Black Sea. Communication Of Powers. 2010 - in that book dealing with northern and north-western reaches of the Achaemenids' empire, there is one by prof. Tuplin about the infamous expedition against the Pontic Scythians 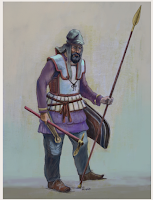 and little Parthia, my favorite ancient Persian empire to study
pillar of Persian studies A.D.H. Bivar - Political History of Iran under the Arsacids - 1983

fantastic Mary Boyce, Parthian Writings and  Literature, 1983,  and very interesting history of the Zaroastrian religion and its peoples  - Zaroastrians, 1979.

Archive Library's works of Marek J. Olbrycht will come in the future installment, in one of these linked articles chain, so to speak.
...
as per my sketches, these are my older sketches, but  I have been reworking them  be it in the 'libre' Krita, GIMP and MyPaint software.
enjoy
Posted by Dario T. W. at Wednesday, August 23, 2017

https://archive.org/details/PictorialGraffitiInTheCityOfHatra PICTORIAL GRAFFITI IN THE CITY OF HATRA

Hi, I'm following your work for a while now; it seems to me that in your drawings the rider is bigger than the horse.

Hello Oana,
thanks for your comment - much appreciated!
yes, I tend to draw small horses - generally speaking I like them small (Eurasian nomad horse, Arabian horse, criollo, mustang, old style cow horse, Old Polish horse), I also tend to believe that the smaller horses were better built (conformation) and easier to maintain cavalry mounts. I have got to write a post about the small horse concept and pre-XIX century warfare etc