Salve,
it has been a while since I posted any winged hussars done by my real or digital brushes.
well,
this is my illustration I painted for the publication titled 'The Great Northern War Compendium' (vol. I & II ) published in 2015, Steven L. Kling jr. editor et al.

It is after an image of a winged hussar companion  painted most likely by the Italian artist Marcin(Martino) Altomonte, the king Jan Sobieski's court painter and alter active in Vienna. 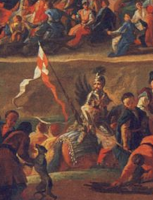 This rider was painted as one of the figures within Altomonte's large canvas showing the Polish king's free election by the Commonwealth nobility at the village of Wola near Warsaw in AD 1697 - the painting was painted most likely between 1697-98? or so ...
I actually  painted two images, the first one, above, has his lance much shorter but the lance is more or less of the length shown in the original painting 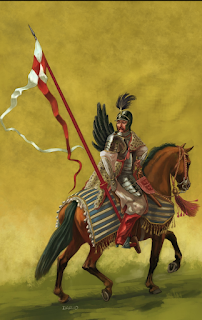