Salve,
sad anniversary today -  of the 2nd Partition of Poland - when Russian Empire and Prussia agreed to take by annexing  substantial parts of the Polish Kingdom. The Prussian land grab was especially painful, since they took  the most populous and productive lands of the Kingdom. 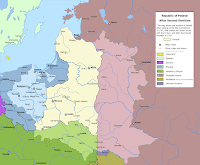 The situation was dire in that January 1793, since after the Polish-Russian War ended in a defeat for the Polish Kingdom in the summer of 1792, where our very inexperienced army stood up to the Russian Imperial army for a little over than 2 months, 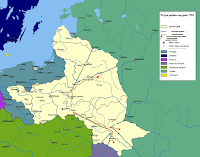 only to be abandoned by their commander in chief, their King, who in fact betrayed the army and his subjects (including the field commander-in-chief his nephew prince Jozef), surrendering unconditionally to his former lover and patroness Katherine the Great.

I hold the view that that particular king of Rzeczpospolita, the last of the elected kings of the Respublica, was particularly inept in all affairs of the state, the exception being  his lavish spending on art, palaces and women, and actually quite disgusting and weak character man, among others taking pay from the Empress of Russia, and who eventually sold his kingdom for a payment of sum certain in 1795.  The rule of Stanislaw August has been subject to a minutely detailed study by great Tadeusz Korzon in his  6volumes work titled ''Wewnętrzne dzieje Polski za Stanisława Augusta (1764 - 1794) badania historyczne ze stanowiska ekonomicznego i administracyjnego'' -  available here.
He was elected by the Russian bayonets and was removed by the Russians as well.
Unfortunately he was not tried for treason by the Kosciuszko Insurrection courts in Warsaw, mostly because Kosciuszko refused to do so, in 1794. He could have been hung says one Polish writer, Jaroslaw Marek Rimkiewicz's book 'Wieszanie' - The Hanging.
His major political reform known as the May Constitution was in fact the final nail into the coffin of Poland, Prussia and Russia using it as the excuse for action, pillage and partition.
Moreover, his legacy has had many defenders and followers in Poland, especially during the Communist Republic and even today.  Jerzy Łojek  in his modern treatment of the May Constitution and the Republica's downfall, ''Geneza i obalenie Konstytucji 3 Maja Lublin 1986,'' examines that interesting aspect of post-1945 historiography.
It was especially insidious that Prussia's Frederic Wilhelm II, the de jure military ally of the Polish  king and Rzeczpospolita since March 1790, broke that defensive treaty and turned into a land grabber and thus instigator of this partition. Prussian army marched into northern and Western Polish Kingdom and occupied the regions of Greater Poland, Kujawy, and Pomerania, annexing them de jure after the treaty of Grodno 1793.
Like in the 1939 when German and Soviet Russia partitioned Polish Republic between themselves

.
And our kings had had so many ample opportunities to erase this vipers' nest in the past.- Sigismund Augustus, Stefan Bathory, Sigismund III Vasa and his son Wladyslaw IV (with his most pompous chancellor Ossolinski) all could have ended the Ducal Prussia with a stroke of their plume, and thus most likely would have caused the downfall of the Electorate of Brandenburg... Nemesis.

An archive.org book on the subject of the Polish-Prussian alliance and its role in the 2nd Partition - by the great Polish historian Szymon Askenazy, where pan Szymon charged that it was the inept Polish diplomacy that had too great expectations and little understanding of the international situation and thus fell prey to the sly Prussian ministers and diplomats' real politik.
ps
In English the Polish army of the period has been treated to a small book by Osprey, written by Vincent Rospond. and there are 2reprints:
of the Gabriel Raspe book from 1776 (or Stanislaw Gepner's copy here)
and the Polish Regiments 1727-1794 by colonel Bronislaw Gembarzewski-
both by Winged Hussar Publishing LLC.
Posted by Dario T. W. at Monday, January 23, 2017