Salve,
I have been busy with some ideas and sketches, but meantime ISIS took over the town of Tadmor and the ancient city of Palmyra, if they carry their promises and follow the same path they have been taking in Iraq then the ancient City is in danger of destruction - sort of a new wave of iconoclasm...

Polish game designers - CD Projekt -  released several days about the new game based on the adventures of witcher/wiedzmin Geralt z Riwii (of Rivia) - I read the saga by Andrzej Sapkowski in the 1990s, loved it must say :) - and we just ordered the new game, hope to do a little game soon ...

I have been playing with some ideas and sort of copied, in ballpen, a detail from a painting by Jozef Brandt. I live practicing by copying Brandt's horses and riders . 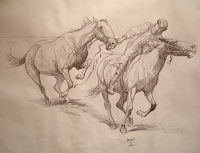 another theme I been doing some reading about has to do with the American Southwest during the era of the Spanish colonial rule. I sketched a cibolero figure, very rough idea , more to follow in the future 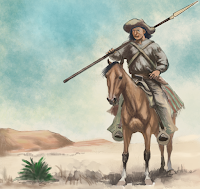 well, until the next time
enjoy