so today let me add a 'shortish' '' review'' of this album, quite recently published in Poland, titled: 'Hussars of the Republic' by two Radosław's - Sikora et Szleszyński. I published a review of 'Husaria Rzeczpospolitej' abum in Polish already in January 2015.
Above,  a link to a random bookstore, my own copy arrived via EMPIK (one of the bookselling chains in Poland).

Ad rem, so I have before me this beautiful album, heavy in content and smelling deliciously of good quality, heavy paper,
It is divided in two parts – the texts – primary sources and iconography – images from the rea -1520s through 1780s; this coffee table book is so full of primary source materials in its text part that it may overflow many a reader, causing too much pleasure in reading the historical texts, for such collection has never been done in English nor French (as the primary sources are printed in three languages) , The iconography part, oo la la - it is just the 'sweetest' display of the winged hussars glory – a tribute to the most beautiful cavalry in the world that the Polish-Lithuanian winged hussars were.


Then content - at first viewing I omitted primary source texts, and immediately threw myself at the brilliant pictures: the Orsha panel from the National Museum (Warsaw), from Pelpin (Cathedral Basilica), and their quality did not disappoint my expectations. Moreover, as the presentation is going chronologically from the oldest to the final historic images and first reconstructions done under His Royal Majesty king Stanislas Augustus, thus we find a lot of good pictures of the famous painting of the Battle of Orsha, the siege of Polotsk AD 1579, Stockholm Roll, Kircholm panel, perhaps a bit strange 'cut' of hussars from Kielce (Bishop's Castle ceilings), Tczew AD 1627, Smolensk 1633-4, plenty of Vienna 1683 campaign, Kalisz AD 1706; there are numerous prints, murals and funerary monuments etc. Sweet as honey this collection is :)
I will add a little more about the funerary monuments & tombstones aka sculptures that perhaps for the first time, have been collected in the context of winged hussars in anylanguage publication. This is obviously not an exhaustive collection of these works of the Polish Renaissance and Sarmatian art, but definitely quite pioneering - ok, maybe not quite, because the 'Polish Winged Hussar' (the Osprey) book by Richard Brzezinski has a great tombstone bas-relief of the church in Sucha, near Strzelce Opolskie, depicting a winged hussar Piotr Strzela, Moravian, who died in 1600 AD - unfortunately, this relief is not in the album.

Several important winged hussars paintings etc are not to be found in this album: Klushino 1610, or Chocim 1673, or the figural fittings of the Grand Hetman Żółkiewski coffin, no winged hussars and horses from the Gołuchow Panel (Poznan National Musem), and several other famous ones which should have been here , but on the other side of this spectrum  the authors have added details of the historical pictures painted  the famous Venetian  painter and king Poniatowski court  artist Bacciarelli though equally they could have added some by Aleksander Orlowski, Jean Pierre Norblin or Smuglewicz etc.

When it comes to 'the published source material , this is definitely the most laudable approach to the presentation of the sources written in multiple languages, the period writers describing our winged horsemen in their glory, however, English collection clearly stands out because of the not so perfect translation - well, it seems that the translator has yet a lot to learn, but then it is not easy to translate historical texts from Polish to English... Nota bene on page 15 there is my own translation of the Old Spanish into Polish - the glory of the Fatherland :)

Maybe a little of the beginning - well, the album opens with a graceful essay on the winged hussars, and includes, of course, many views propounded in the books et  articles written by Radek Sikora , we have a list of the most interesting achievements of hussars between AD 1574 and AD 1694 ​​(English version pages 45 - 47. French on pages 77 - 80), here,   I think the book could have used a table of contents for all text in the album, as well as a list of illustrations, it would have been am easy and clear method for the reader /collector to peruse this beautiful publication.
Looking back at the iconography of our winged horsemen presented in the album – I think that even some very 'thin' analysis of iconographic material could have added a lot to the understanding of the imagery and history of our cavalrymen. Well, it's too late, but it remains a gap, and a user without some prior knowledge of the winged hussars iconography must remain dazzled by the pictures but not quite educated. Moreover, our authors' make  a claim about the XIX century paintings and how they, the Polish  artists of the period,  falsified the image of the winged hussars when contrasted with the original iconography. Unfortunately this idea strongly worded by the authors must remain open, as there is not supporting discussion of this thesis in the text with references to the iconography presented etc.

But I can add a word or two about the XIX century winged hussar reconstructions in paint and pen or pencil mentioned in the text. 'Having educated myself ' on works of our XIX century Polish painters, I do not think that the image of winged hussars conjured  by Orlowski, Suchodolski, Kossaks (father and son), Brandt, Pawliszczak or Grottger and Rozwadowski et al., had been falsified, moreover I think their image was particularly tailored to the times of Poland's disappearance from the world's map  and  they responded to the need of the enslaved Polish Nation for some glory and hope, and where to find a better imagery of glory than in the winged hussars, especially in the images that these painters conjured.
While the so called scientific  reconstruction of winged hussars really begun only in the 1930s,  our XIX century painters were not just simply imagining their winged hussar. True they, of course, used their artistic skill and heart to conjure those paintings, but more than anything they were also doing lots of research by perusing then existing arms and amour collections and archives kept by the  aristocrats, nobility, and rich bourgeoisies in the partitioned Poland and abroad, by reading the historical accounts printed, written or preserved via families oral histories . Hence their image of the winged hussar is as  valid reconstruction as they could have achieved, based in the the primary source materials and artifacts  they had access to and their own understanding of these materials and our Polish-Lithuanian past.

Finally, I will add, mainly because the authors  announced, in the introduction to this album, that there might be a volume II in the near future. that it is perhaps a pity that the authors decided to present the collected materials in this fashion ( true, it is a chronological order)  without some partitioning and classifying this collection, let us say, by dividing it  into two parts: the sixteenth century to the AD1648, and Volume II from the Cossack wars to end the existence of hussars, or the collection might have been divided methodologically according to the reigns of our monarchs etc. I think that the album would have been clearer and above all easier to peruse , be it for the specialist or the amateur history of the winged hussars …

Ergo, I am eagerly waiting for the album Number II, -:)

Closing, I am going to rate this publication, using Amazon.com rating – 1 to 5 stars .

I will judge this album to be '4 stars and a half' as a whole, but when it comes to the quality definitely I am giving them '5 stars'. 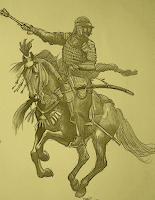