Salve,
at least since the Middle Ages infantry used various portable devices to protect themselves from the numerous cavalry, especially shock cavalry. A device known by a French name - cheval de frise - was quite effective against cavalry and was used whenever possible, eventually crossing  over to the Americas, and the US armies used this device as well, from the Revolutionary War to the Civil War.

In Polish military history, since we mainly used cavalry to attack and destroy the enemy in a pitched battle, there are instances when our enemies employed cheval de frise, caltrops, or both, along with artillery, muskets and pikes, eg battle of Gniew, battle of Kliszow - where winged hussars were stopped and prevented from securing a potential victory because the enemies used the defensive portable devices.
At Klushino the cheval de frise ('kobylice' or 'ostrostawidła' - names according to a XVII century Polish military engineer and architect  Józef Naronowicz-Naroński) failed to stop our winged hussars. 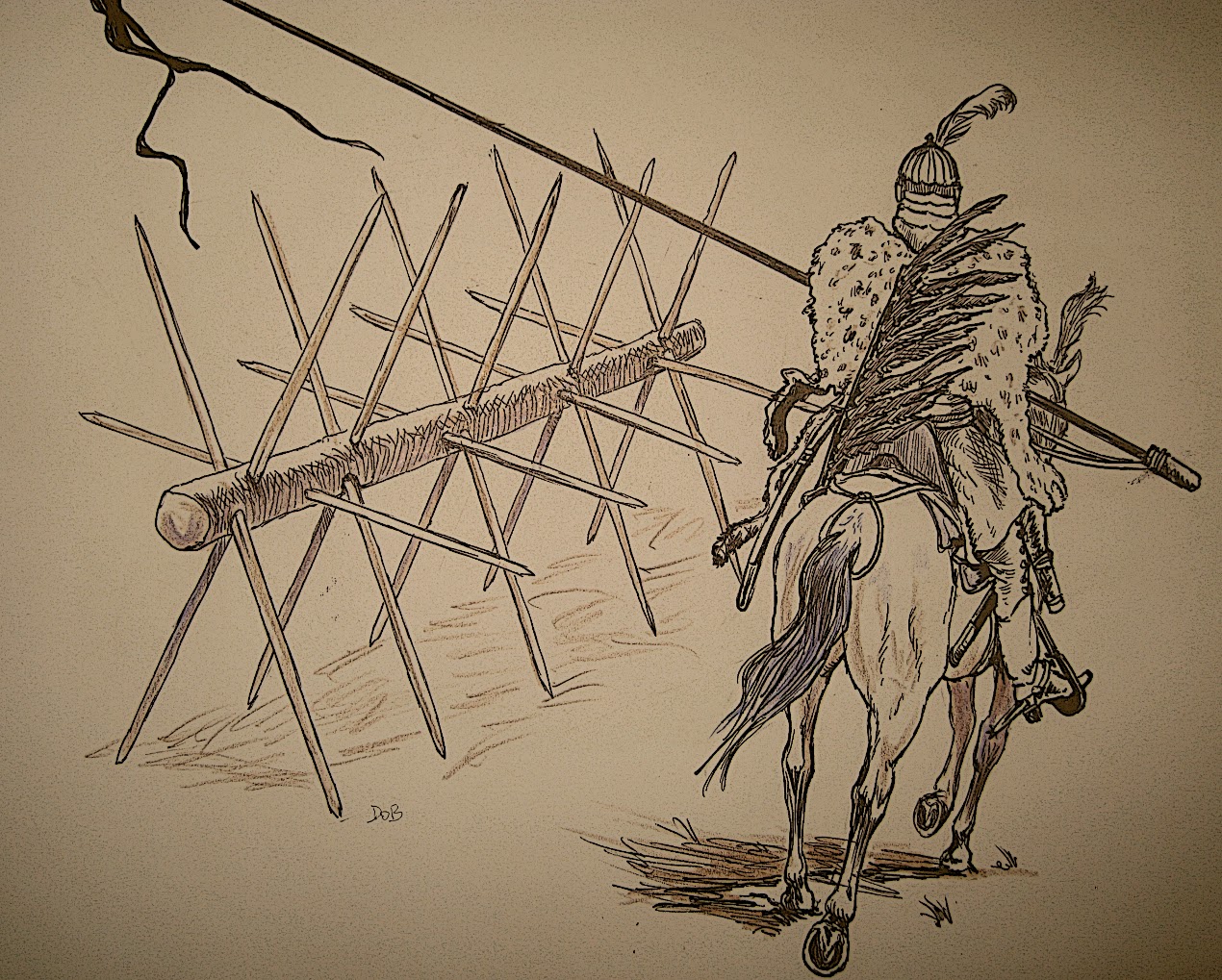 Since there are historical sources describing the device then I am going to take the opportunity afforded by the digital library collections via google books and to quote a rather late depiction of this defensive infantry tool precisely depicting a cheval de frise as used in the early XIX century.

''A treatise on the science of war and fortification: composed for the use of the Imperial Polytechnick School, and military schools ; and translated for the War Department, for the use of the Military Academy of the United States : to which is added a summary of the principles and maxims''
written by Simon François Gay de Vernon (baron & Napoleonic army colonel, published in France in 1805) translated by John Michael O'Connor,United States Military Academy.
Printed by J. Seymour, New York 1817

vol I- p 294-295
'Before the use of artillery, great quantities of chevaux de frise were carried in the train of armies, and they were then, as in our days, used for several purposes; especially to cover parts of fronts of battle, and shelter them from the assaults of a numerous cavalry. The infantry likewise used them as a moveable intrenchment that was always ready at hand. Nowa-days, the chevaux de frise that are carried along with the artillery train, are of little other use than to close up the outlets and gorges of enclosed works, destroy fords, etc.
The cheval de frise is composed of an hexagonal beam 20 to 30 decimetres (6 3/4 to 10 feet) long, and 20 by 20 centimetres (8 inches). On the six sides or faces 33 stakes called lances, are fixed, and are 15 decimetres (5 feet) long, and in thickness not exceeding 5 by 5 centimetres (2 inches); they are shod with iron. Each beam has its extremities furnished with an iron, ring, from which a chain is extended with two eyes and furnished with a T. This chain serves to unite together all the chevaux de frise, and form one whole of parts difficult to separate.
Chevaux de frise are made of white wood, with a view to render them light. The total weight of one, including the lances, is 63 kilogrammes (abuut 120 lbs. Eng.). We have already seen that openings or passages should be left in the least exposed parts of intrenchments, either for the movements of troops, or lor communicating with the country without. These passages are closed in various modes, but most frequently with particular chevaux de frise, or by barriers. These obstructions are used at all posts, and are prepared by the troops to prevent surprise, This kind of cheval de frise, although a little complex, may be made by the common workmen found in every village. The description therefore of this work, forms part of those elements of fortification in which it is proper to instruct the young officer of the line, so that he may be able to conduct the essential defences of a post.
The body of the cheval de frise intended for closing an outlet, is 30 to 35 decimetres (10 to 12 feet) long, and 25 by 25 centimetres (10 inches) thick: when fixed, the diagonal of the section perpendicular to the axis, is vertical. It is sufficient to bristle it with lances set square on the 4 faces, or we may cut the beam into 6 faces or sides. The lances are set in grooves with iron bolts or heavy nails, and clasped with iron, the better to fix them to the body of the cheval. To make this machine moveable, one of the ends is cut and a hole of 10 centimetres (4 inches) is bored in it, to pass through the rounded head of one of the fixed upright posts. To support the other end of the cheval and give it an interior rotary motion, it is left of the rectangular form for a length of 30 centimetres (1 foot), and on the two upper faces four spindles (fuseaux) are set two by two in the same vertical plane and perpendicular to the axis of the body. These are fixed and strongly bolted, and joined together underneath by a cross piece. The two horizontal cross pieces are 15 centimetres (6 inches) apart; they are crossed in the middle by a bolt with a trundle. This trundle or wheel bears the whole weight of the cheval de frise, and traverses upon a circular timber fixed in the ground. This same end of the cheval lies against the second upright post, and is fixed to it by a bolt or other means.'

Very nice post, and excellent blog, I really like the Grunwald 2014's pics and the fabulous miniatures of Lancelot du Lac!

Many thanks, master Phil!

by the way, you do have a great blog on the military figurines !

Too kind of you, thanks!