Mongol saddles and a Mongolian warrior in MyPaint 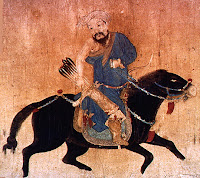 Salve,
I would like to share a quick sketch I made after a Chinese drawing of Batu-khan and look at the Mongolian saddles through history.
I admit I have neglected the Great Eurasian steppe so there are some images and text to do away with this awful negligence on my part - :)

Again, I will start a link to this great article on the medieval and later Central Asia saddles. And another article titled 'Mongolian Horse and Horseman'

Well, the Mongolian-style saddles of the Great Steppe developed, over a period of 1000 years, from the horned saddles invented by the Indo-European nomads - Saka and Tocharians (Yuezhi) sometime during III-II centuries BC [e.g. according to prof. Nikonorov] - nota bene  there are some very recent interesting discoveries from Mongolia related to soma ritual, amanita muscaria (''muchomor czerwony'' in Polish) in form of tapestries showing armoured warriors, horses and saddles -  through the saddles most fully seen in the Tang Chinese  sculpture and paintings of VI -VIII centuries AD, as evidenced by this beautiful horse here or by image of the saddle horse of great Tang Emperor Tang Taizong: 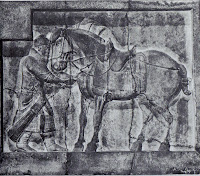 This is the Middle Ages Mongolian saddle tree from the Ulan Bataar Museum, dated to XV century:

and another old saddle tree:

And this is a beautifully lacquered and painted saddle tree from the Ming Dynasty:


Photos a Mongolian saddle tree and here, and here is an image of modern saddle from Mongolia:

And here there is a great photo of full modern Mongolian saddle outfit.

And this is my sketch: 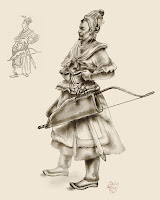 Beautiful saddle (intricate metal work of the pommel visible) from the National Museum of Mongolia.

On this site there is a book on how to make Mongolian saddles [sic!]

ps
prolific Polish early modern history blogger and researcher Michal Kadrinazi offers a link to a docudrama on the battle of Vienna 1683 Ad.
Also,I can happily share with you that my friend Radek Sikora has finished a book on the winged hussars during the 1683 battle of Vienna.

Great post on a fascinating subject, and an excellent sketch.