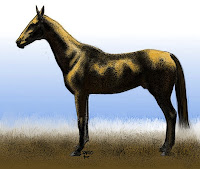 Salve,
I hope to start a series of posts - all based on the source material from XVI-XIX centuries - related to the Turkoman horse of the Central Asia, including its most noble 'strain' known as the argamak  - these horses were ancestral to modern Akhal-Teke horse.  Now, there is this Polish Akhal-Teke breeder, pan Jacek, who has a very interesting blog on the history of the Akhal-Teke horse, but in Polish only, where one can read very detailed and knowledgeable accounts related to the history of the breed.
The most interesting of the accounts I found is the one describing the training and feeding of the warhorse and then carrying of the raid into Persia during the 1860-70s.
Well, let us start with a little description of the Central Asian  Turkoman tribal divisions as they were seen/perecived by the Western European travelers during XIX century;

The Turkomans occupy the country between Khiva, the Oxus, and the North Persian frontier, and are divided into many tribes; but the principal of these inhabit the south of this great tract, viz., the Yamouts, the Goklans, and the Tekes. The Yamouts occupy the shores of the Caspian, and are, as has been mentioned, water as well as land pirates. They are supposed to number about 40,000 tents. The Goklans occupy the country of the upper Gourgan, the Attrek, and Simbur, and number about 12,000 tents. The Tekes are divided into two bodies; the Akhal Tekes, who live on the northern slopes of the Kuren Dagh mountains, and at Tejend; and the Merv Tekes, who inhabit the great oasis of Merv, and the banks of the Moorghab river. Each of these bodies numbers about 30,000 tents; and each Turkoman tent on an average turns out a mounted horseman. The number of men available for the field may therefore be easily calculated.
The Turkomans are a Turkish race, and speak a dialect of Turkish, and they hold the Sonnie faith. In person they are muscular, heavy-limbed men, with large hands, rather flat, broad faces, and small eyes; thus showing much of the Tartar type. There is generally a merry, cunning twinkle about their eyes which does not give the idea of a hard, cold-blooded race. It is difficult to define the Turkoman government, as they are nearly the only people in the world who really appear to rule themselves. In each village there is usually, however, one man, or Aksakal, who takes the lead, and whose advice or command is generally followed; and amongst the Tekes the threatening of danger has brought a real leader to the surface in the person of Kourschid Khan, a man much respected for his bravery and general character, but who holds a very uncertain position.
That the Turkoman type should still be so distinctly marked is very curious, as they constantly capture Persian girls, who become their wives, and so must bring a strong infusion of Persian blood into the race; but it is not traceable either in their appearance or in their habits. The peculiar characteristic of the Turkomans is their bold, independent air. Their domestic habits are simple in the extreme. They have rarely more than one wife; and the women have great latitude accorded to them. They are never veiled, as in most other Mahomedan countries, and they occupy themselves thoroughly with the domestic concerns of their lords. The latter, when not engaged in predatory expeditions, lead a most indolent life; looking after their horses, smoking, and gossiping being their usual occupations. The care of the flocks and herds, as well as the execution of a little agriculture being entrusted to the boys and women. These last lead an active life, and much of their spare time is devoted to weaving the carpets, which are the only articles of luxury allowed in the tents. These tents have been already described; and it is the province of the women to strike and pack them whenever a move is contemplated. The men wear the long brown woollen or cotton dress that is common both with the Khoords and Usbegs; but both men and women often wear a red silk or cotton shirt beneath. The former wear the usual black or brown sheepskin cap, but it is generally smaller and lower than those worn in Persia. The ladies on gala occasions indulge in considerable finery. Their head-dresses are then most elaborate, the hair being plaited and arranged into most fantastic shapes; and they delight in high red or yellow boots, and adorn themselves with numberless trinkets.
The diet of the Turkomans is most frugal. A little millet and milk forms the staple food, and they move their camps from place to place as the season renders it convenient for getting pasture for their flocks, or raising the small grain crops that suffice for their needs.
Their manners are coarse and rough, presenting a great contrast to the polish of the Persians; but, on the other hand, they are manly, brave, and enduring. Their reputation for hospitality is widely known. They are brought up, however, from childhood to consider that violent robbery is the highest of virtues, and every growing youth looks forward to the day when he may win his spurs by joining in a chapaoul, or raid. But, if the Turkomans are lazy in their habits and careless of their wives, there is one tiling to which their whole attention is devoted—their horses. And well do these noble animals deserve all the care that is lavished upon them, for in courage, speed and endurance combined, they stand at the head of the equine race.

Clouds in the East: travels and adventures on the Perso-Turkoman frontier..

Now a  short entry on the horses:
Vámbéry Ármin , a Hungarian traveler in Central Asia gave the following description of the horses he found in his travels: 1. The Turkoman horse ; and here a main distinction exists between the Tekke and Yomut breeds. The former, of which the favorite races are the Korogli and the Akhal, are distinguished by extraordinary height (sixteen to seventeen hands). They are slightly built, have handsome heads, majestic carriage, wonderful speed, but no bottom. The latter, those of the Yomuts, are smaller, finely formed, and unite speed with unparalleled endurance and strength. I have seen many horses of this description which had carried each his Turkoman rider, with a slave behind him in the saddle, at a constant rapid gallop for thirty hours. In general, the Turkoman horse is distinguished by a slender barrel, thin tail, handsome head and neck (it is a pity that the mane is cut off), and particularly fine and glossy coat; the latter quality is owing to its being kept covered, summer and winter, with several housings of felt. With respect to the value, a good Turkoman horse may be had at a price varying from one hundred to three hundred ducats, but never under thirty ducats.
2. The Ozbeg horse resembles the Yomut, but its form is more compact, and denotes more power; its neck short and thick, rather suited, like our hacks, for journeys than serviceable in war or olamans.
3. The Kasak horse, in a half-wild state, small, with long hair, thick head, and heavy feet. He is seldom fed by hand, but is accustomed to seek his own subsistence, summer and winter, in the pastures.
4. The Khokandi, sumpter, or cart-horse, is a cross between the Ozbeg and Kasak breeds, and is remarkable for its great strength.
Of these four races, the genuine Turkoman horses have only been exported to Persia, and the Ozbeg horses to Afghanistan and India.


Travels in Central Asia: being the account of a journey from Teheran across ...

On wild life as perceived by the English writers based on their travels :
Animals of Central Asia –
Wolves, foxes, badgers, wild goats, and grey hares are to be found in abundance in the country specified, and in the province of Ferghana deer are so numerous that he compares it to "an English park." The large Maral stag is to be found in herds of several hundreds. Water-fowl, herons, cranes, ibises, wild geese, swans, and a bird resembling a flamingo are also to be met with in immense quantities round Issik Kul and along the Syr Darya and its affluents. Bears are to be found in the rocky country, and a tame kind of gazelle, which is, however, never to be seen in greater numbers than five or six at a time.
The Zarafshan valley east of Samarcand is the haunt of wolves, lynxes, foxes, etc. etc.; and eagles and vultures are frequently to be seen. But on the whole the wolves are of a cowardly race, and the Kirghiz hunter does not hesitate to attack them single-handed and armed only with a heavy riding-whip, which is made of wire woven into the lash. With regard to the Central Asian tiger, which M. de Ujfalvy states, on what authority we know not, to be larger than the Indian tiger, and particularly fierce, it seems to be an animal which is gradually disappearing. Twenty-five years ago, when the Russians were first advancing along the Syr Darya, the marshes on the banks of that river swarmed with them, but from this quarter of the country they have been expelled by the encroachments of man. They are still found in limited numbers along the banks of the Chu river and on the shores of Lake Balkash.

England and Russia in Central Asia: with two maps and appendices ..., Volume 1