Salve,
finishing this Xenophon's horsemanship work with a fragment of a mural (Alexandrovo) painting of Thracian horseman hunting wild boar and a vase painting of Odysseus stealing horses  at the bottom

Of a horseman's armour and arms.

l. We wish also to show how he should be armed who prepares to encounter danger on horseback.

In the first place, then, we say that his coat of mail should be made to suit his body ; because the whole of the body supports one that fits well, but the shoulders only support one that is too loose; and one that is too tight is a prison, and not a coat of defence.
2. Since the neck, too, is one of the vital parts, we think that a covering should be made for it of the same shape with the neck, rising from the coat of mail; for it will not only be an ornament, but, if it be made as it ought to be, will cover the face of the rider, if he wishes, up to the nose.

3. As for the helmet, we consider that which is of Boeotian manufacture to be the best; for it protects most effectually all the parts above the corslet, and yet does not prevent the wearer from seeing.

The coat of mail, again, should be made in such a way that it may not prevent the horseman from sitting or stooping.

4. About the abdomen, too, and the parts below and around, there should be skirts of such a description and size as to protect the limbs.

5. Since, also, if the left hand should be hurt, it disables the rider, we recommend the armour which has been invented for it, and which is called the hand; for it protects the shoulder, the upper part of the arm, the elbow, and the portion of the arm next to the bridle, and can be either expanded or contracted ; and it also covers the part under the arm which is left unguarded by the coat of mail.

6. The right hand a rider must raise, when he wishes either to hurl a weapon or to strike a blow. Whatever portion of the coat of mail, therefore, would obstruct it, must be removed ; and if in its place a sort of flaps with joints be put, they will, when the arm is raised, unfold at the same time, and, when it is let down, will close.

7. As to the right arm, that sort of defence which is put on it like greaves on the leg appears to us to be better adapted for protecting it than that which is attached to the coat of mail; and the part of the arm which is exposed when the right hand is lifted up must be defended near the coat of mail, with a covering made of calf's skin or of brass; otherwise it will be left unguarded in a most dangerous place.

8. Since, too, if the horse is disabled, the rider will be in extreme peril, it is necessary to arm the horse also with defences for his head, his breast, and his shoulders ; for these assist likewise in guarding the rider's thighs. But of all parts of the horse we take most care to protect his belly, for it is at once a most vital and a most defenceless part; but it is possible to protect it by something connected with the housings.'

9. It is necessary, too, that that which covers the horse's back should be put together in such a way that the rider may have a firmer seat,'' and that the back of the horse may not be galled. As to other parts, also, both horse and horseman should be armed with the same precaution.3

10. The legs and feet will naturally hang down below the covering of the thighs; but these parts may be sufficiently protected, if a sort of boots be constructed for them of the leather of which sandals are made ; for such boots may be at once armour for the legs and shoes for the feet.

11. Such is the armour that may prove, if the gods be propitious, a defence against harm. But to inflict injury on an enemy, we recommend the short curved sword rather than the long straight one; for from a horseman, seated aloft, a blow from a curved sword will be more effective than one from a straight sword.

12. Instead of a reed-like spear, as it is weak and inconvenient to carry, we rather approve of two javelins of cornel wood; for a skillful thrower may hurl one of these, and use the other against assailants either in front, or flank, or rear. They are at once stronger than a spear, and more easily carried.

13. We approve of the hurling of a javelin from a great distance; for by that means more time is allowed for throwing it and for taking another weapon. We shall intimate in a few words how the javelin may be hurled with the greatest effect. If the rider advance his left side, at the same time drawing back his right, and rising on his thighs, and launch his weapon with its point directed a little upwards, he will thus send it with the greatest force and to the greatest distance ; and he will send it with the truest aim, if the point, as it is discharged, is directed steadily to the mark.

14. Let these admonitions, and instructions, and exercises be considered sufficient to be prescribed for a private individual. What it is proper for a commander of cavalry to know and to do, is set forth in another treatise. 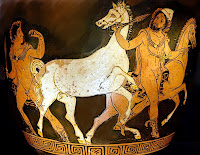 Many thanks for posting the translation(interpretation?) of Xenophon's Peri Hippikes !

I'm wondering what was meant by the translated expression "coat of mail" ,since (to the best of my knowledge) a true mail-based amour was probably a bit early for the period in which Xenophon lived. The advice for a curved sword instead of a straight one sounds interesting as well.. Could Xenophon perhaps mean a Makhaira?

you welcome, but the praise is really due to google books, :)
Coat of mail in this case will be most likely a scale armor, very popular with the Iranians. MOre on it in the future :)
Curved sword will be kopis or machaira/makhaira, an ideal weapon for a brief encounter when on horseback.