Persian horse bits in my sketches and rhytons from Armenia

Salve,
I have been playing with some pen  drawings of the  horse bits of the Achaemenid and Sassanian Persia. 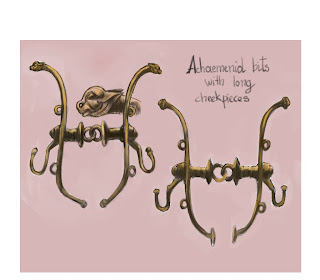 First sketch  is a rather frivolous interpretation, the historic bit is an actual find from Greece, evidenced in the Alexander mosaic (  mossaic  ). In this drawing of a  horse bit from the Achaemenid period (a sample of the actual Apadana Persepolis  horse bridle I gave on this blog here http://dariocaballeros.blogspot.com/2010/01/annus-novus.html ), the two long cheek pieces  end  with a calf head, like in the Vouni treasure, Cyprus.  achemenet Vouni_Treasure

Second sketch (titled sketch I)  is of a Sassanian cub-bit ( shown in this example of Sassanian metal plate   http://4.bp.blogspot.com/_C6_DXX4pkmQ/Set13wp_RMI/AAAAAAAAAFY/WYonmvEwe0w/s1600-h/persian+plate+inter.jpeg  ) and two horse heads with a device, that had been used along with a snaffle-bit, in a from of a metal cavesson-like device attached to the headstall, going over the nose and under the chin. 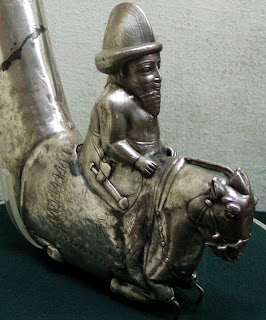 Finally the above amazing Achaemenid rhyton (  wikipedia Rhyton ) from the 'Fortress of Blood' aka Arin Berd (Erebuni   Erebuni_Fortress ) in Armenia (Urartu),  its picture  found at wikimedia Achaemenid_Goblet_Erebuni
shall become my next 'serious' reconstruction attempt, along with another Erebuni  rhyton with a horse  Achaemenid Goblet02  , and also some terracotta horse-shaped vessels from Achaemenid Village (Susa) dated to the V century BCE/BC.
Posted by Dario T. W. at Sunday, September 05, 2010