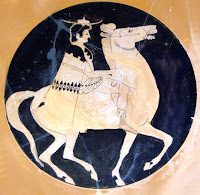 How a horse is to be taught to leap. How he is to be prepared for military service.

1. Since there will be occasions when the horse will have to run up and down sloping and hilly grounds, and along the sides of hills, when he will have to leap over obstacles., and to spring up and down, the rider must train and exercise both himself and his horse completely in all these maneuvers; for thus they will be likely to contribute more to the safety and advantage of each other. 2. If any one thinks that we are merely repeating ourselves, because we now make mention of the same things that we mentioned before,1 let him understand that this is not a repetition ; for we then exhorted H. horseman, when he purchased a horse, to try whether the animal could perform such exercises ; but now we say that he must teach his own horse, and are going to prescribe how he must teach him.

3. He that has got a horse utterly inexperienced in leaping over ditches must, after slackening the leading-rein, go over the ditch first, and must then pull him on with the rein, that he may take the leap. 4. If he will not leap, another person must take a whip or a switch, and apply it on him smartly, when he will not only leap over the required space, but much further than is necessary; and afterwards there will be no need to strike him, for if he only sees some one coming behind him, he will leap.

5. When he has thus been trained to leap, let the rider mount him, and take him first to small, and then to larger ditches. Just as he is going to leap, let the rider touch him with the spur. Let him spur him, too, when he is teaching him to leap up and down from any height; for if the horse does all these things with an impulse2 of his whole body, he will do them with more safety to himself and his rider than if his hinder parts lag either in leaping over an object or in springing up or down.

6. To make him go down steep places, we must begin to train him on soft ground; and at length, when he is accustomed to this, he will run much more readily down a slope than up it. As to what some people fear, that horses will dislocate their shoulders in being ridden down steep places, let them be under no apprehension, when they are told that the Persians and the Odrysae (Thracians) all ride as fast as they can down steep hills, and yet have horses not less sound than those of the Greeks.

7. Nor will we omit to mention how the rider must accommodate himself to each of these particular circumstances ; for he ought, when his horse suddenly raises himself for a leap, to lean forward (since by that means the horse will feel less pressure on his hinder parts,1 and will be less likely to shake the rider), and, as he pulls in the reins when the horse alights, he must throw himself back, for he will thus be less jolted.

8. As the horse is leaping over a ditch, or stretching up an ascent, it is well for the rider to take hold of the mane that the horse may not be oppressed by the difficulty of the ground and by the bit at the same time ; but in going down a declivity, he should hold himself back, and support the horse with the bridle, that himself and his horse may not be carried headlong down the slope.

10. Since it is necessary, too, for him who rides his horse at full speed over all sorts of ground to be able to sit firmly on him, and to know how to use his arms on horseback dexterously, the practice of horsemanship in hunting is to be commended, where the country is favourable, and wild beasts to be found; but where these conveniences do not offer themselves, it is a good sort of exercise for two horsemen to make such an arrangement as this: that the one is to retreat over ground of a varied character, and, as he flees, is to turn about from time to time and present his spear, while the other is to pursue, carrying javelins blunted with balls, and a spear prepared in the same manner ; and whenever the pursuer comes within a javelin's throw of the pursued, he is to discharge his blunted javelins at him, and, whenever he gets within the stroke of a spear, to strike him as he is overtaken.

11. It is well for a horseman, also, if he close with an enemy, to pull his enemy towards him, and then suddenly push him away ; for this treatment is likely to unhorse him. On the other hand, it is well for him who is thus dragged to urge his horse forward; for by this means he is more likely to throw off his antagonist than to fall off himself.

12. If, on any occasion, when two camps are pitched opposite, the cavalry ride out against one another, and one party pursue their adversaries close up to their main body, and then retreat to their own, it is good for a rider to know that in such circumstances, as long as he is near his friends, it is right and safe to wheel about among the foremost, and charge the enemy at full speed; but he must take care, as he comes close upon them, to have his horse under control; -for, by acting with such caution, he will be in the best condition, as is probable, to injure the enemy and to escape injury from them.

13. The gods have enabled men to teach other men by speech what they ought to do. As for a horse, it is certain that you can teach him nothing by speech; but if, when he does what you wish, you gratify him in some way in return, and, when he is disobedient, make him feel punishment, he will thus effectually learn to obey you in what is required of him. u. This we may express, indeed, in a few words, but it should influence us throughout all our treatment of horses; for a horse will more readily take the bit, if, when he has taken it, something pleasant results to himself ; and he will leap across ditches, and jump over obstacles, and comply with our wishes in all other respects, if he looks forward, when he has done what is required of him, to some indulgence.