The Horsemen of Hadrian's Wall - turma in action

a quick and joyful sharing  - this time to a BBC documentary titled The Horsemen of Hadrian's Wall  - part of the Digging for Britain (Series 6 Episode 4). On the Roman cavalry training and tournaments known as hippika gymnasia, like the famous Cantabrian circle, cuneus etc .

Narrated by professor Alice Roberts, who has been co-presenter within the series,  this episode is especially interesting since many reenactors took part in it from across UK and continental Europe - eg Yves Ruttiman (Yves is a fantastic Roman cavalry reenactor) or Timothy Dawson (among others Tim owns  the great side  devoted to the Roman Eastern Empire or Byzantine history of culture - do peruse it). 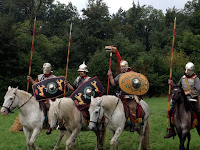 This presentation is quite spectacular and very informative, so do watch if you can - link .

The film spends some time to study the Hexam Abbey Roman funerary monument of one Flavinus, Roman cavalry standard bearer. 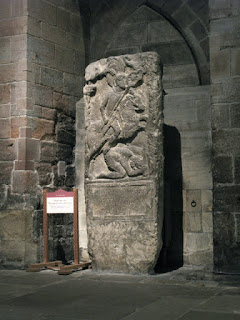 the revolutions of the 'turma' or the troop  of Roman cavalry reenactors are explained and put in historical perspective in a text and film by dr. Mike Bishop & Dr. Nigel Mills. The video, bits and pieces from the longer BBC video above, nicely complements the main documentary. More information and films here.

Valete
in case we forget, Britain is still home to Comitatus, the home of Roman cavalry reenactors - peruse their site.