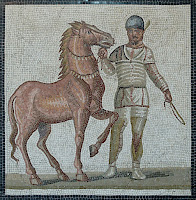 and since yesteryear  we have had the brand new month of February, and new post in the older theme - the ancient Roman vehicles etc.
This time a few images showing the Roman quadriga or 4-horse chariot - the most extreme of the Roman vehicle use for the specator show and pleasure - Academia article on the topic here - with the driver or charioteer having a short but perhaps if victorious then almost very celebrity-like moment in time.
Rome's Circus Maximus was the most famous ancient Roman chariot racing stadium.

Let us start with some of the Roman mosaics-
Barcelona, Spain - circus 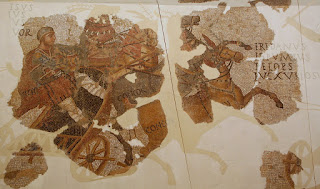 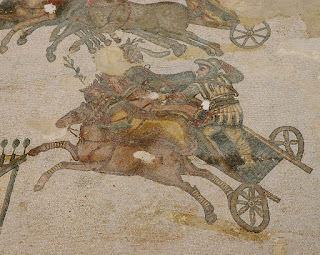 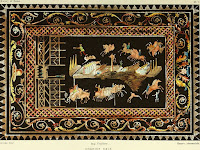 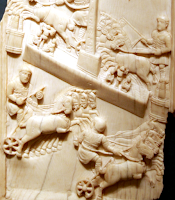 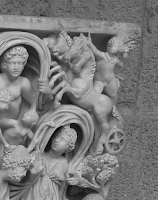 Finally, some modern connections and reconstructions  have been developed for the film - mostly due to the amazing popularity of the American Christian novel titled Ben-Hur, A Tale of The Christ by Lew Wallace, the most popular novel of the XIX century .
there has been attempts at reconstruction of the Roman chariot racing - in the feature movies like Ben Hur (3 version - 1925,1959 & 2016, all spectacular and ahistorical but I do prefer the Charlton Heston's version, there was a short film made in 1907, can be viewed here) -  and in more documentary fashion lately the Timelines' production on the  Chariot Racing. 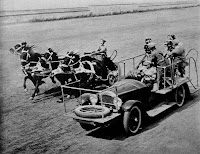 Also, last year  the author and equestrian reenactor Mike Loades  developed his new video production  on the Roman circus chariots and it can watched here. I am yet to watch it ..

Valete
ps
all images are from Wiki Commons
Posted by Dario T. W. at Sunday, February 02, 2020

one of the most famous charioteers - https://en.wikipedia.org/wiki/Gaius_Appuleius_Diocles

His winnings reportedly totaled 35,863,120 sesterces, equivalent to 358,631.20 gold aureus or 26,000 kg of gold. As one modius (6.67 kg) of wheat in 79 AD Pompeii cost seven sestertii, Gaius Appuleius could have acquired 34,172 metric tons of wheat, roughly equivalent to US$7.3 million in 2019. His earnings could provide a year’s supply of grain to the entire city of Rome, or pay the Roman army at its height for a fifth of a year. Classics professor Peter Struck describes him as "the best paid athlete of all time".[1] In equivalent basic good purchasing power, Diocles' wealth would be between approximately $60 million and $160 million.[7] In a single day, he earned more than the annual pay of a procurator.[8] His wealth also eclipsed all but the wealthiest of the Roman senators.[9] (wiki link)

https://www.thegreatcoursesdaily.com/chariot-racing/
including the a naufragia in the arena etc - quite interesting article ,,
..
also - day at the chariot racing in ancient Roman prose and poetry https://www.exams.cambridgescp.com/sites/www.cambridgescp.com/files/teachersnotes_dar.pdf