Salvete Omnes,
yesterday I did some reminiscing about the tragedy of 9-11 and the war that has been following  the attack ever since and that this war may last forever. 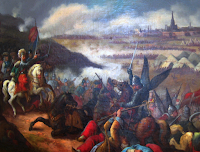 Since the early morning, but 335 years ago, the Polish, Imperial and German states troops or the allied Christian army had been battling their way down to the plain where capital of Hapsburg empire was surrounded and had been besieged by the multiethnic Ottoman army under grand vizier Kara Mustafa.

Islamic and Christian soldiers fought one another since the early morning, at first the infantries battling one another, but carried by their bravery and good soldiering slowly the Christian soldiers pushed their Muslim adversaries towards the Ottoman camps and thus opened way for the possibility of cavalry to charge.

It was already the afternoon and perhaps the final assault would have taken the next day,  since Jan III Sobieski had envisioned the final assault against the Ottoman lines, with the Polish cavalry leading the way, especially Polish lance-bearing cavalry, i.e. , the winged hussars armed with kopia ( perhaps 4.5-6meters long, hollowed and painted lance with equally swallow tail long pennon ).
Thus King Jan III was waiting for the moment when field was cleared for the lancer banners to probe the terrain and to attempt the charge. Sometime between 1600 and 1700 hours Jan III ordered one of his army winged hussar companies - prince Aleksander Sobieski - commanded by Zbigniew Zbierzchowski to charge the multitudes in front of the king-led right Polish Crown wing of the Christian army, this being the left wing of the Polish forces.

It was clear that Jan III wanted to know if such mounted  charge was feasible.

The 110-120 lancers and horses-strong company of heroes, in two kopia-bristling rows with red and white pennons flying, charged towards the direction of the commander-in-chief of the Ottoman army huge tent looming in the distance with many thousands of sipahi and otehr cavalrymen of the Ottoman main lines; in front of the charging winged hussars went, on his own volition, the court treasurer Andrzej Modrzewski armed and armored as a pancerni cavalryman.
Pan Modrzewski, galloping well in front of the charging banner, reached the Ottoman screening horsemen and soon was engaged by some brave Ottoman horsemen,  in short time he killed one or two with dzida and wounded some but nunc Hercules contra plures and he had been disabled with some well aimed cirit javelin and dzida blows and  died before the charging winged hussars were able to even reach join him in this uneven fight (his body was carried back to the Polish lines with his head intact as the cantering whinged hussars prevented the Ottoman cavalrymen from carrying away Modrzewski's head); having suffered  their first casualty the winged hussar banner went cantering forward and struck the Ottoman lines at a full gallop like a lightning, but was surrounded on its wings and eventually came to a standstill amidst the Ottoman units. Yet  with utmost difficulty they were able to disengage from their  Muslim foe and with some serious losses (12 companions and perhaps 25-30 retainers were killed ) the winged hussar banner was able to return  to the king proving the charge was possible.

During this charge on the left wing of the Polish Crown army, on the right wing of the Crown forces  another charge was made by a tactical cavalry  unit known as szwadron ( Castellan of Krakow Andrzej Potocki winged hussar banner with two pancerni banners- starost of Halicz Stanislaw Potocki and starost of Rzeczyca Jozef Sluszko - on its wings) led the starost of Halicz Stanislaw Potocki, this unit charged  on the right wing of the Polish army, soon seconded by the second szwadron under voivode of Krakow Szczesny Potocki (his own winged hussar banner and his own pancerni banner and another pancerni banner- Boguslaw Potocki's one). The charging cavalry suffered more losses in total than the lonely royal Sobieski banner and proved that the terrain was quite difficult on this wing of the Polish army.
Finally satisfied as to the possibility of all-out cavalry charge the commander-in-chief of the Christian allied armies and king of Polish-Lithuanian Commonwealth ordered all winged hussar and pancerni companies grouped into szwadron tactical units to charge the Muslim lines. The many thousands of riders of the allied cavalry companies followed in tow.
The rest is history...
Hail to the Victors!
Vae Victis! 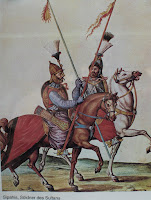 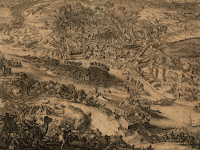 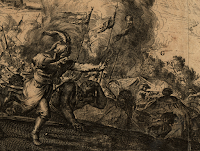