I have just learned that I will not be taking part in the August 15 reenactor parade* during the Polish Armed Forces Day in Warsaw  - the organizers allegedly saw no room for diverse troops, but just larger and more uniformed mounted troops like the 2nd uhlan regiment (Duchy of Warsaw) - we were going to go as Vistula Lancers, but being a few we did not cut the final team - they say...

...so just sketching, including copying figures from the XVII century paintings, and thinking about the Latin saying sic transit gloria mundi.. 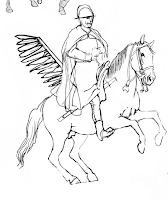 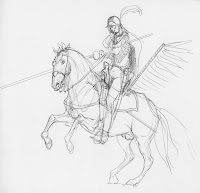 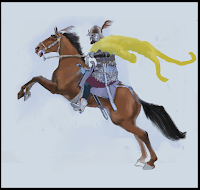 Valete!
*last fall the former minister of defense Antoni Macierewicz called for a huge gathering of reenactors to celebrate the 100th anniversary of Poland regaining her independence - nota bene semper Vivat Polonia Resitututa .
It was supposed to be 600 cavalrymen and several thousand of infantrymen from the early Piast period to the War World II and beyond marching along the present day professional Polish soldiers.
This parade would have been bigger than the Communist regime celebration of 1000 years of Polish history in 1966. But apparently due to many reasons this grandiose plan has been reduced in size and scope etc.
I hope there will be some parade on that August festive day, even if it will be smaller in size.
Posted by Dario T. W. at Friday, June 08, 2018