Salve,
Ancient Romans called the period from June 22 to August 23 a 'canicula' (Polish - Kanikuła ) when the sun is in the Canis Major ('Big Dog') Constellation and the Dog Star or Sirius shines brightly.
Our present 'dog days' season closing today has been bloody. It perhaps opened with a killling of a lion by an American dentist in the great socialist state of Zimbabwe, and this quite controversial episode of rich folks' trophy killing  was followed by a worldwide great outpouring of emotions about hunting, trophy hunting etc, even causing the US federal authorities to investigate the hunter himself. I found a nice commentary on this truly sad event (I am not sure who owns the copyright  to this image). 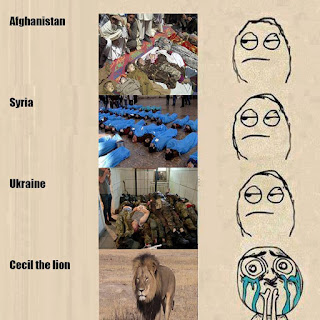 According to the reports from the Near East conflicts, the occupiers of Palmyra questioned, tortured and executed one of the most revered archaeologists of the city of Zenobia and Syria,  82-years old dr Khaled Asaad, gentleman and scholar, was beheaded by ISIS - article from Reuters.
But we can preserve in our collective memory the following image of this fine Syrian gentleman 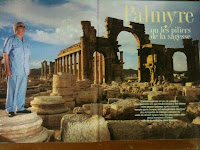 Dr Assad worked, amongst many international archaeologists working in pre-civil war Syria, with the eminent Polish scientist prof. Kazimierz Michałowski who started excavating in Palmyra in 1934, and prof. Michał Gawlikowski et al.; while the ancient Palmyra was one of the  sites where Polish archaeological teams had worked for years until 2009 eg the Poles and Syrians discovered a ruin of the Christian church from the VI century in the ancient Palmyra in 2009. 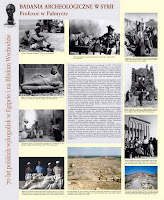 Amongst many artefacts, Polish archaeologists discovered this amazing mosaic in Palmyra 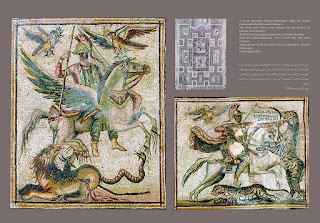 On this site you can see the photo of dr Asaad's mutilated body - treatment quite similar to what the Soviet Communists, Hitler's Germans and UPA-Ukrainians did to their victims during the 1917-40s.

The same group that rules now over Palmyra and much of western Iraq and eastern Syria desecrated and destroyed the ancient, more than 1500 years old, monastery of St. Elian (St. Julian of Emesa) near Homs (ancient Emesa) two days ago. In fact, the world of the most ancient branches of Christianity is being erased and  eradicated in that part of the world. The Turks who destroyed the Turkish Armenians a 100 years ago at least left the Armenian churches and entire medieval cities in the eastern Anatolia etc. In rebel occupied parts of Syria and Iraq their Christians are massacred and ethnically cleansed while their ancient shrines and places of worship are being demolished.

European southern states seem to have been experiencing onslaught of migrants and refugees from Africa and Asia, and the eastern  Greek Islands of Kos and Lesbos have been in the forefront of the media, but also the French port of Calais and Italian south, as well as the former Yugoslav republic of Macedonia etc. Judging from the numbers of the arrivals this is an unprecedented movement of peoples, similar to the period of 1945-49, when millions of  the Central and Eastern Europeans were forced to relocate in the post-Yalta European order.  However, the new Asian and African 'migrants' are foreign to Europe, but they do come from the countries and cultures that used to be European colonies etc. This time the people moving and coming are not unlike the folks that were flooding the Western and Eastern Roman Empires during the late IV through VI century AD (the later period had to do with the migration of the Longobards into Italy and Slavs into the Balkans). Time will only tell how far this new ''Völkerwanderung'' will have gone within this EU quasi-federal state, ruled by professional politicians, ravaged by consumerism and gender socialism ideology, and causing the re-emergence of ultra-nationalist parties.

Happily, three Americans prevented the massacre-in-progress on the the Paris-Amsterdam train near Arras, France and in my opinion they do merit a Legion of Honour each - :)

Also, if you read articles from Academy.org, and you should if you visit my blog, ''Rivers of Blood'' by Thomas Madden is a great and well-reasoned take on the issue of the massacre of the Saracen defenders of Jerusalem AD 1099,  the famous passage - " in the Temple and porch of Solomon men rode in blood up to their knees and bridle reins " written by Raymond D'Aguilers and repeated by other chroniclers etc.

"Faced with the evil called terrorism there is a good, that's humanity. You are the incarnation of that," Hollande told the four men.