Salve,
let us gallop over to the Great Plains of North America, and the XIX century writings of various military men, trappers, mountainmen and just travellers.

In this instance I would like to bring to your attention Captain James Hobbs of California(portrait taken from his opus magnum) who wrote the grand recollections of the Far West adventures aptly titled ''Wild Life in the Far West: Personal Adventures of a Border Mountain Man'' (1873).

Dear author, on pages 458-9, describes the Comanche mode of mounted fighting (not unlike Mr Catlin quoted already on this blog 1 -  2), he mentions a separate mount for war (war pony)or chase(hunting of buffalo/bison) also known famously as a buffalo runner :

COMANCHES AND THEIR HORSES. (p. 458-59)*
There is one warlike feat in which all the Comanche warriors are trained from their infancy. As the man is dashing along with his horse at full speed, he will suddenly drop over the side of his horse, leaving no part of his person visible, except the sole of one foot, which is fastened over the horse’s back, as a purchase 'by' which he can pull himself to an upright position.
In this attitude he can ride for any distance, and, moreover, can use with deadly effect either his bow or fourteen-foot lance.

One of their favorite modes of attack is to gallop towards the enemy at full speed, and then, just before they come within range, they drop upon the opposite side of their horses, dash past the foe, and' pour upon him a shower of arrows directed under their horses’ necks, and sometimes even thrown under their bellies. All the time it is nearly useless for the enemy to return the shots, as the whole body of the Comanche is hidden behind the horse, and there is nothing to aim at save the foot just projecting over the animal’s back.
Sometimes the Comanches try to steal upon their enemies by leaving their lances behind them, slinging themselves along the sides of their steeds, and approaching carelessly, as though they were nothing but a troop of wild horses without riders. A quick eye is needed to detect this ruse, which is generally betrayed by the fact that the horses always keep the same side towards the spectator, which would very seldom be the case were they wild and unrestrained in their movements.

Every Comanche has one favorite horse, which he never mounts, except for war or the chase, using an inferior animal upon ordinary occasions. Swiftness is the chief quality for which the charger is selected, and for no price would the owner part with his favorite steed. Like all uncivilized people, he treats his horse with a strange mixture of cruelty and kindness. While engaged in the chase, for example, he spurs and whips the animal most ruthlessly; but as soon as he returns, he carefully hands over his valued animal to his women, who are waiting to receive it, and who treats it as if it were a cherished member of the family. 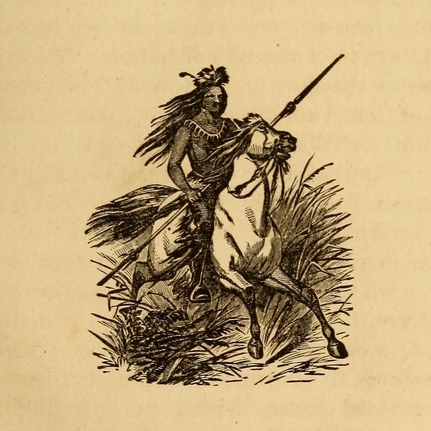 enjoy
ps
the images enclosed are some of the rather fanciful engravings from the very book, some taken after George Catlin's paintings
*original spelling