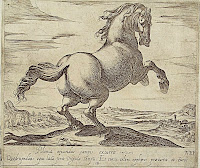 Salve,
I am glad to share with you this image, as pictures of Polish horses (and ideas of what Polish horses were thought to have looked like) from early modern Europe are not very plentiful.