Salve,
a very interesting and rather rare image of Russian army during the war with Sweden (1656-58), when Russian forces tried to capture Riga, the capital of Livonia, having singed a truce with Polish-Lithuanian Commonwealth after they had defeated the armies (at battle of Shepeleviche (Szepielewicze), Polotsk, Smolensk, Wilno, Vitebsk, Mogilev, Kowno, Grodno, Puławy, Kazimierz etc), captured half of our country and massacred countless nobles and townspeople in today's Lithuania, Belarus and eastern Poland between 1654-55.
The most notorious was the capture and consequent slaughter of Mscisław's (today's Mstsislaw ) defenders on July 22, 1654 where  15,000 men, women and children cared for and commanded by Jan Statkiewicz were put to sword by the victorious Russian army under prince Aleksey Nikitich Trubetskoy. It is know as the Trubeskoy's slaughter.
The Russians spared only 700 artisans who were needed by them. Tsar Aleksey Mikhailovich Romanov was the commander-in-chief there (or at least he was present there to encourage his commanders) and yet they failed to capture this important town, and consequently would suffer many defeats and setback by 1661.

well, here are the horses, riders and some of the camps... 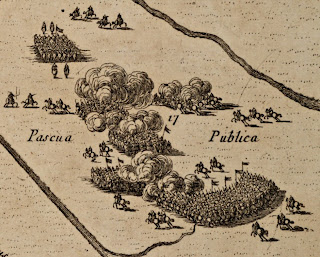