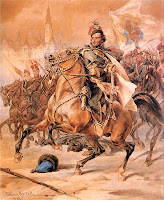 Salve.
long time ago I wrote this http://dariocaballeros.blogspot.com/2010/02/uani-introduction.html , so now let us jump to this remarkable book from the end of the XVIII century, when a Polish-Lithuanian Tatar (and Polish) lancer was yet to become the famous ulan [uhlan] of the Napoleonic wars. Note that Prussians were actually great importers of Polish horses in the XVI,  XVII and XVIII centuries,  and most likely the so called Trakehner horse breed was created by the Prussian breeders out of some foundation mares and sires that were of Polish imports in the XVIII century.

'Remarks on Cavalry; by the Prussian Major General of Hussars Warnery' for the first time published in 1781.


on the lance, the 'queen of cavalry battle':

“There was formerly in European armies, a species of cavalry called lancers: they were armed at all points; […] they were all noble or lived nobly, but they could not be employed on all occasions, they were too expensive, each of them was obliged to have two horses for his own person, a large one for battles and tournaments and another for marches and detachments; and beside these, one for the servant who had the care of them: and it was in consequence of the great expence that these troops were discontinued, when the armies were augmented
[our general is obviously simplifying the reason why heavy lancer of  XVI and early XVII centuries became obsolete in the Western European theater of war]. It is nevertheless certain, that the lance will always be the Queen of Arms for defensive of this nature of cavalry.”

“Ulans are nowhere to be found, except in Poland, unless you assimilate them with the pretended Prussian 'Bosniacks'; they have faithfully served the Kings of the House of Saxony [Saxon kings that also were the kings of Polish_Lithuanian Commonwealth in  a from of in personal union between the countries, similar to Wladyslaw Jagello] and the present one has three regiments of them in his service; they are well mounted and disciplined, and form an admirable corps of light cavalry: they ought to be all Tartars of Lithuania ( still Muslim), brave, faithful, and steady, and by no means drunkards. There are however amongst them a few Poles; the Respublica [Polish-Lithuanian Commonwealth] has also a few corps or 'pulks,' but they are by no means in the same order that the others are. They have preserved their ancient institutions; the Towarischs [towarzysz] or Noble Comrades [who] have their Podstowy [pocztowy] or servants [retainers], who are Poles; the Towarisch are the masters, and the Podstowy the privates, as formerly in France, the latter perform the ordinary service. […] the arms of the masters are, a pike [a lance] with a banderole [pennon], (or small flag) a sabre and pistols; those of the servants the same as the Hussars [sabre, carbine, a pistol or two]. In an action the latter form in second line in two ranks, in small squadrons, and the masters attack or charge in single rank, which was the custom amongst all the Gen's d'Armes [knights and later lancers].”

“no light troops are better appointed or more active or allert on horseback, than the Polish Ulans: the equipage and appointments of the Ulan and his horse, are admirable, commodious and proper: and although I am not very partial to those of the Hungarians, yet I am persuaded it is very proper for several nations, particularly those in which it is national dress.”

a little on the Polish, Tatar, Moldavian horse and Hungarian too:
...Polish, Tartar, and Moldavian horses, answer better for them [service as light cavalry] than Hungarian, those being extremely degenerated within these fifty years; without doubt, for want of attention to procure stallions from Turkey, which are found to be the best in the Hungarian Haras (or studs,) and they never had any other, while the Turks were in possession of that country.
and when talking about a light horseman's steed  our general states :
[...] for Polish horses, as light, strong, and excellent for all the operations of war.
[...]In a course of 600 paces, a good German horse, in condition, will get before a Polish, Tartar, or other horse of that description : but if the course is continued to a greater distance, the latter will regain its ground, leave the other behind, and continue in wind for a much longer time : and should the heavy horse be forced a little beyond his wind, he becomes insensible to the bit and spur, and looses all his activity.

On a light horseman and his equipment, and Polish [sic!] saddles:
For a soldier to be really a light horseman, he must be able to turn his horse quick and short, when in full speed, to raise up and catch any thing from the ground; he will find himself much firmer in his feat, have greater command of his horse, and much more agility in the exercise of his arms, &c. by being mounted on an eastern saddle, that is to say, upon a Hungarian, Turkish, or Polish one [as one can see we Polish people had our own saddles similar to Hungarian and Turkish]; to those who have been accustomed to other saddles, they appear at first to be inconvenient, but they very soon find themselves perfectly at ease in them, and ever after, prefer them to all others; they are very light, cheap, and durable, and do not so often require repairing [sic!] as the others do.

Continuing:
A good goat or sheep's skin, should be used instead of a housse [textile], they will cover at the same time, the pistols and the portmanteau [in a Polish  and Hungarian fashion, I should add] ; the bridle also ought to be as light as possible, without any unnecessary buckles or straps; there should be but one attached to the pommel of the saddle, to strap on the cloak rolled up before the trooper, which will be very important, to protect his belly from a thrust with the bayonet or sword, the stirrups should be bronzed; and by these means, the trooper, on his arrival at camp or quarters, has but few straps and buckles to clean. He covers his arms, accoutrements, &c. with the goat-skin, and has time to attend to his horse and himself; in short, every thing should be light and proper, without affectation. I have been informed, that except as to the saddles, the English regiments of Eliott, and Burgoyne, are thus equipped.
The Hussars do not require tents, [...] no light troops are better appointed or more active or allert on horseback, than the Polish Ulans: the equipage and appointments of the Ulan and his horse, are admirable, commodious and proper...
until the next time :)
ps
Juliusz Kossak's watercolor  is to show one of the foremost Polish light horse commander and 'zagończyk' (zagonchikh) of the XVIII century Kazimierz (Casimir) Pulaski, 'father of the American cavalry', hero of USA and Poland. Here our Kazimierz  is shown during the action against the Russians near the fortified and very Holy monastery of Częstochowa (where our only  Queen of Poland resides :) ),  that monastery  he successfully defended (for 2 years) against the Russian invaders and their Polish supporters during the Bar Confederacy 1768-72.
..the saddles come from the Polish Army Museum in Warsaw, and represent XVIII century Polish-Lithuanian saddlery, most likely from the old royal city of Lwow (Lviv) :)
Posted by Dario T. W. at Saturday, October 09, 2010

A fine blog. Keep it up!

However, as a Pole you make one consistent error that is very annoying to Anglo-Saxons.

In English the convention is to write 'sixteenth century' or 16th century; never would an Englishman or American write 'XVIth century' (or similar).

thank you for your comment :)
I do like the Roman numerals, so they are to stay with this blog when I am talking about previous centuries... my personal choice I suppose, it has nothing to do with being a Pole :)
...
and I do not think I have written 'the XVIth century,' but simply XVI century etc... but I may be wrong and I missed the edit, I promise to improve
hasta la proxima vez

Many thanks for the intriguing mini-research and interesting pictures..especially those marvelous saddles...
I remember seeing some Hungarian saddles (among other things) here:

Could this partly be because the Hungarian cavalry (hussars in particular) abandoned the lance in the course of 17th century and thus didn't need such a high cantle anymore? Or is this completely unrelated? What do you as an equine-historian of sorts think?:)


Cheers and much obliged,
Samuel


P.S:
To the best of my knowledge the writing of centuries in Roman numerals appears to be the norm for Central European scholarship (Polish , Hungarian , Slovak ,Czech etc.)... perhaps Dario is used to some other standard (or not), hence the possibility for an (annoying?) confusion ;)