Slow Autumn re-start of my bloggin'

Salve,
I must say that my blogging has been rather slow these days, I do hope it will pick up soon but thus far it is a rather snail pace of a movement. Do forgive me.
Of a subejct I intend to cover within next two months or before the end of the calendar year of 2010
- more Saka and Sarmatians, including their horse tack
- North Americana - meaning Native Amerindians, Spanish colonial, Mexican and American horsemen - in part inspired by sculptural work of fantastic  artist David Lemon, who also has become a new 'follower of my blog - David's blog here
- Polish, Russian,  Lithuanian etc subjects of  XVI-XVIII centuries, here dear Samuel has provided me with so much 'ammunition' from Slovakia and former Hungarian Kingdom that I cannot decide where to start
- some Slavic medieval themes - I got some projects in development
God willing :)
Curious thing happened  - I was surfing internet and on this website - Russian military history magazine  Zeughaus - in their own publishing company book on the battle of Konotop  (  Ukrainian-Crimean Tatars and Polish alliance  contra MuscovitesAD 1659 ) battle I saw my own artwork,  I inquired further and I found that they sued my artwork on the front title page inside and on page 16 within the corpus of the book itself.
The image shows  Crimean Tatar warriors on horseback, and it was published in the Infort Editions book titled Biala Cerkiew (important battle of Polish-Cossack wars) - in 2007 - wanax.pl biala-cerkiew-23-25-IX-1651
These are the pages :) :

I do not have to add that my name is not mentioned within the book and that I was not asked about the image being included in the publication... instead the publisher's page carries a note that illustrations inside the book were prepared by V. Typikin, artist...
any my original sketch in ink and acrylic - also above another sketch from that book on the Biala Cerkiew battle. 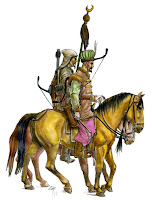 Dario, I hope You get in touch with them in regards to illegal use of Your work... they should really be ashamed...

I will write to them - at this juncture it is very interesting that they have used my acrylic drawing but have not given me a credit. The only publisher I have given my permission to use this image has been 'my' Polish publisher - Inforteditions from Chorzow in Silesia, Poland.

I will post their response if any, after all I do appreciate their magazine and want them to publish more articles and books.

It fills me with indignation!

Their Russian tradition of piracy lasts many years :(