Salve,
I have been researching the Russian reitars of the 1653-67 war, that was the war where our Polish-Lithuanian Republic was  first invaded by the  Tsar of Muscovy Russia ( I use the name Muscovy until the reign of Peter the Great who created Russia, as per Lev Gumilov thesis) then by the Swedes and prince Rakoczi of Transylwania  George_II_Rakoczi .
this is the image thus far ... 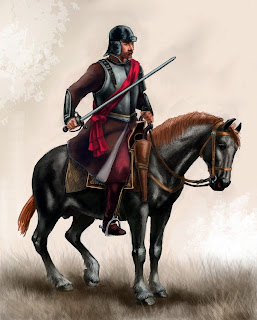 Gentlemen,
thank you very much for your comments.

Samuel,
my intent was to show young, noble Russian/Muscovite nobleman already going 'Western'(Western Europe that is).

Mr. David, it was a pure chance to see your works in person - I do some sculpting and it is only horses, and your horses are awesome, especially since they are so 'historical' in conformation. I am following your blog too, these videos showing you working on the pieces are so educational - simply put fantastic http://adayinthelifeofalemon.blogspot.com/