We often visit  the American Museum of Natural History. my son loves it and I share his admiration for this museum.

I often scout its exhibits of the horse related material culture objects, and my searches are quite fruitful at times - :). 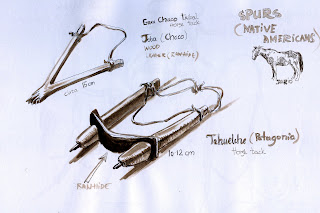 The objects at hand - spurs -  belong to two distinctive Native American tribal groups that became horse riders after horses had come into their domains with the European invaders -  Qom-lik (Toba) http://en.wikipedia.org/wiki/Toba_%28tribe%29  http://farm4.static.flickr.com/3437/3891493961_9f05c0520a.jpg    and     Tehuelches http://es.wikipedia.org/wiki/Tehuelches  http://www.argentour.com/images/tehuelche2.jpg    http://www.flickr.com/photos/rsolar/3425200788/sizes/o/in/set-72157616425046463/   (nice jaquimas), both were very fierce warriors and horse riders. Here an intersting photograph of Tehuelche women http://4.bp.blogspot.com/_pjhXY2Bumvs/SisGbroszHI/AAAAAAAAAi0/GW2oDn-LHI4/s400/Onas+-+Tierra+Del+Fuego+rcd+Jun07%2301.JPG and some text on them In this extract from THE CONDOR'S FEATHER (due July), Thia Beresford comments on the Tehuelche Indian girl who travels with them on their expedition:
...............................................................
‘Her heart is as deep and silent as the pampas,’ Thia said. ‘It is as though she is in tune with the vast countryside around her. A kind of innate animism which native people posses, which we civilized people seem to have lost.’
William had no answer. There was certainly something about this Indian woman which he could not explain. Without meaning or intention, she attracted him like a pin to a magnet, yet she hardly ever spoke, showed little expression, even conserved her gestures to essential movements. She was as tall as a longbow and moved like a willow in the breeze. Was as strong as any man he knew and slightly taller than he. She was not beautiful by English standards with her plucked eyebrows and painted skin, but she had the elongated face and forehead of the high priestesses he had seen engraved on the walls of the ancient temples in Cairo. Now he wished he had drawn her portrait as he could never replicate it accurately. Yet her face was engrained in his mind and he knew he would never forget it. ( source http://haleauthors.blogspot.com/2009/06/kattn-tehuelche-indian-from-condors.html  )

Anyway, I find these spurs very interesting and quite ingenious. I have some more photos and depiction of their tack and I will post it soon.
I do intend to write more and draw more about the South American natives and their relationship with horses, both in war and peace. I am very interested in the so called caballo criollo, and in this article - http://www.manosart.com/PIEZAS%20DE%20LA%20SEMANA/Fotografia/Antigua_Fotografia.html   - there is a very interesting image of a Tehuelche woman  with her typical horse tack on a very interesting horse - the very  horse is described :
"El caballo Criollo
Esta fotografía tomada en 1899 no sólo es rica por cuanto describe las formas de la equitación indígena femenina, sino que también nos habla del biotipo del caballo ahí ensillado. Para Carlos R. Dowdall -autor entre otras obras de "Criollo el caballo del país" -, este animal es algo más liviano, de grupa derribada, convexilíneo de tipo oriental. Dowdall explicará que años más tarde se buscó un caballo más pesado, el que fuera identificado bajo la denominación de biotipo "europeo". . "   More on it in the future.
By the way, more on the vaquero, horse, and his horse tack will be coming as well, especially the various Argentinian saddles etc. IN this photo the most famous long distance horses Gato  and Mancha http://www.aimetschiffely.org/images/2-in-hand.JPG
http://www.aimetschiffely.org/images/AFT-NewYork.JPG
Posted by Dario T. W. at Sunday, April 25, 2010