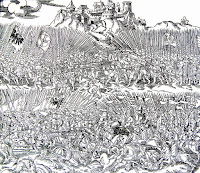 today's date - 15th of July - or the date of the battle of Grunwald is still very important for the Polish collective memory, traditions and history  (also in the memory of Belarus - known as Бі́тва пад Гру́нвальдам,  and Lithuanian - known as Žalgiris ).

Priest Jan Długosz, Wieniawa coat of arms and the most important Polish XV century chronicler, wrote a detailed  account of the battle  - in the link the English translation from de re militari site. 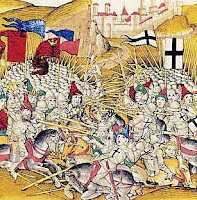 I would like to point that  the allied army under king Wladyslaw III Jagiello included between 1000 to 3000 Tatars of the Golden Horde under their emir Saladin Jalal al Din son of khan Tokhtamysh. At that time this princeling was a refugee from the civil wars inside the Horde and had been a vassal to prince Vitold of Grand Duchy of Lithuania. In fact, in 1411 Jalal al Din made his claim to the throne of the Golden Horse and did become the khan of the Golden Horde, albeit for a very short period.

The end of the XIV century was the time of the trek and settlement of various  groups of Muslim Tatars under their emirs and mirzas in the Grand Duchy of Lithuania. They became one of the most frightful subjects within the realm and some of their descendants  live in eastern Polish Republic today.

It took several more wars and the Reformation to finally end the Order rule in the Baltics, the state became secular duchy ruled by prince Albrecht Hohenzollern and as the so called Ducal Prussia the humble vassal to the Polish kings, this status lasted until AD 1657... ( I will not bore you with the details as you can easily read more on many Wikipedia pages devoted to the Prussia's history ).
So let us remember the event, its symbolic significance, marvel at the art devoted to its memory and pray for the souls of our ancestors. 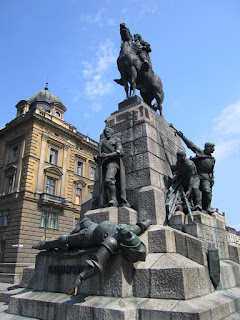