Salvete Omnes,
new month - February is a bit cold in our Northern Hemisphere so let us go back to the times when earth was much warmer that today and winters were not so crazy as the one we have now over the American Midwest.

today, at first it was going to be  just a quick post that grew and morphed into a larger thing -:), perhaps a little bit of an intro about the complicated relations between the steppe peoples of the later I millennium B.C.-early I millennium AD and the Han Chinese and their great empire that created true China after the short lived Qin empire of Qin Shi Huandi.
This uneasy relationship is perhaps epitomized in the figure of famous Flying (galloping) horse of Kan-su (today written Gansu)

During the most of Han empire the Hexi Kan-su corridor was the area of much fighting, at first in the early II century BC  between the Yuezhi or the nomadic Indoeuropean of this area against the invading Hsiung-nu (Xiong-nu - perhaps mix of Indoeuropean, Turkic and Mongolian tribes) or nomadic Mongolian steppe dwellers who wrestled  Kan-su and Tarim basin from the Yuezhi (who in turn pushed the Saka into Bactria, Northern India and eastern Persia - hence Sakastan in Persia and Saka in the Parthian armies), while the Xiong-nu eventually faced the Han Chinese armies moving north and north east.

After much fighting the Han empire broke and conquered the Hsiung-nu (Xiong-nu) of their immediate vicinity - famously it was general Dou Xian who had  accomplished this - and pushed them out of  Kan-su and entered the rich oasis-kingdoms of Tarim Basin (today Uigur homeland within the Peoples Republic of China) and moved west towards the Tien-shan mountains and beyond.
In the vastness of Tarim the Han emperors established the Protectorate of the Western Regions, and until the end of the Han rule it was the area of much warfare and diplomacy but also of large trade routes, giving rise to what later has been named  the Silk Road and growth of  rich cities of Central Asia like Bukhara, Merv, Herat, Samarkand etc.
From the start when Han armies stood on the empire's northern frontier they had to rely on horse transport, and Han administrators established a very elaborate trade in horse and horse breeding along the Kan-su frontier and other northern frontiers. The needs of the imperial armies were huge - some 300,000 were needed for campaigns and army maintaining outer frontiers along the western and northern Han empire  perimeter - said one ancient Chinese historian.
These great horse needs put even greater strain on the empire's ability to produce war horse or even good sumpter horses (and for some reason Han Chinese were not best horse breeders, even after capturing Ordos Steppe and Kan-su steppes, and forcing curious Dian Kingdom into Han 'yoke'), thus making horse breeding of quality stock the most important task for the empire administrators,  and forcing much reliance on constant horse tribute from conquered nomadic tribes and states and also seeking trade horses obtained via exchange for ever-desirable Chines silk.

But not all people along the trade and geopolitical Chinese empire power routes were willing to trade their equine wonder weapons aka blood horses to the Chines adversaries (real or potential) without some or more resistance, so from the Chinese sources we have the story of the expeditions to the West, including the expedition to get the heavenly/celestial horses from Ferghana between  111-102 BC.
here we have perhaps a symbolic heavenly horse, his neck and tail high while galloping and neighing at the same time, as powerful stallions tend to do; note the forelock tied, in a typical nomadic style denoting a war horse. 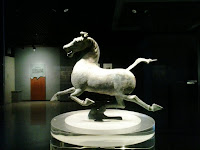 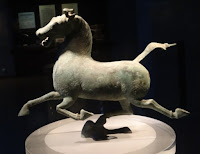 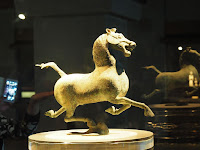 Perhaps more about the Han horses and cavalry in the future.

About the turn of the Common Era, population censuses in China became statistically useful for the entire united mainland. By 2 CE, censuses were taken and recorded on occasion.

by comparison Rome:
-early empire under Augustus has been placed at about 45 million
-At the height of Roman power in the mid 2nd century AD, conservative opinion is that the Empire was comprised of some 65 million people.
less conservative estimates [...] the population of the Empire may have approached 130 million people or perhaps over 40% of the world's total during the 2nd century.