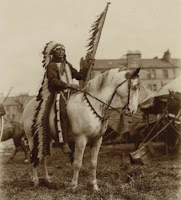 it has been a long while since we visited any Plains Indians and their horses.
meantime I have been listening to some audio books on the subject of Buffalo Bill's Show etc, and started reading one of the archive.org books on Buffalo Bill and his life

(plenty of some very interesting details about horses, horsemanship, hunting and adventure etc in the American West during the second half of XIX century).

On Wiki Commons there is a good collection of photos showing one very handsome elder Lakota named Iron Tail, who was both participant of the Buffalo Bill's Show and face of the American Indian Head nickel.

Iron Tail or Sinte Maza (1842/50-1916)was a Teton Lakota, of the Oglala tribe, and perhaps participated in some fighting against the US Army during the wars 1866-77. He went to Canada with Sitting Bull and later on, upon return joined the shows and thus he became famous as the most recognizable of the Buffalo Bill's Show performers, traveling widely in the US and in Europe. After the demise of the Buffalo Bill's Show went on to perform in other shows, all the way until his death in 1916.

Being a traditionalist and elder he was interviewed and provided valuable information about the Akicita warrior society (here about warrior societies , a bit simplified but passable)  by Richard Nines in 1911(James Walker, Lakota Society, pp.32-34 ). 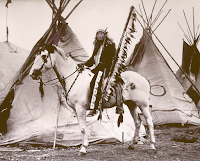 He became even more famous for his profile, having sat for a portrait done by the NYC sculptor James Earle Frase.

Sadly he lost his son during a crash on the way to join him at the Buffalo Bill's Show.

He finished his days performing 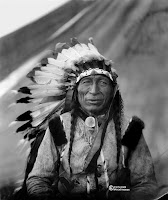 with the demise of the wild west shows and refusal of the reservation agents to let them perform in the growing Hollywood movie industry, most of the Plains people were resigned to eke a meager life within their windswept reservations, living on small allotments divided many times over,  devoid of purpose and losing their culture. The XX century had not been kind to the Plains Indian peoples.
Valete!