Salvete omnes,
Warsaw Royal Castle  has in its collection a painting by a Dutch painter Dirk Stoop.
The Museum calls - Bitwa z Turkami ( Battle with the Ottoman Turks), and dates it after AD1661.
It shows a combat scene between the Islamic, most likely Ottoman Turkish, horsemen  and East-Central European  horsemen. They could be Polish horsemen, as the period saw the new war between Polish-Lithuanian Commonwealth and Ottoman empire's vassal the Crimean Khanate that in AD 1672 became the outright Ottoman invasion of Polish realm and eventual conquest of the Polish province of Podolia.
There is drama and fear, but also a display of camaraderie as the horseman in a red cap is about to save, with his javelin or short 'dzida' the fallen green clad bareheaded cavalryman.
The horsemen are of two kinds, turbaned ones with bows and arrows, or lancers wearing fur-trimmed hats somewhat Polish in character and design.
Horses are stallions, colorful when comes to their coats and manes all in the Baroque fashion and preference, but also powerful war mounts. Curiously they are all shod and have long-shanked curb bits. Their horse tack is somewhat orientalised, especially the breastplates that could have come from some collections messer Stoop had access to. 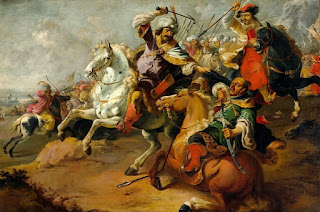 The painting is unusual on many levels - amazingly well painted horses, dynamic combat scene, flamboyant costumes somewhat resembling figures from other period paintings and costume books.
I wonder about the time and place of painting of this piece. From this site you can quickly see that Stoop lived and worked in Hamburg, then Swedish territory, since at least 1667 until 1682, although there he worked for the Cathedral (demolished in 1807) that was outside the ius patronatus of the city. According to the Museum this painter painted more than a few of such combat scenes involving Turks.
Perhaps one of the Polish lords hired his brushes to do this work?
Or he was influenced and inspired by the news coming from the south-east?
enjoy
Posted by Dario T. W. at Wednesday, September 13, 2017