Salve,
winter is upon us, time to prepare for Christmas and all the good time of the family holidays, soon followed by the New Year's festivities. I must admit I would prefer the New Year to have been on 21st of March, like the ancient Persians had it.
On a sad note, not all good Christians will be joyous this holiday season, as the war rages in the Middle East and there are acts of violence against our Christian brethren in southern Asia, eg I just learned that in Cairo, Egypt, the Coptic St. Mark's Cathedral worshipers praying during mass were bombed today, with a large death toll and many wounded among these innocents and defenseless, their only crime being Christian - pacem aeternam. 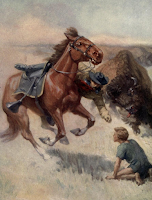 Back to history and horses - I have been doing lots of reading and some of it has been on the life and achievements and failures of general George Armstrong Custer, including this own writings (here in a free audio book format) and his wife's (eg these 'libre' books about the general 1 , 2, 3   from archive world library)  - I like this book Robert M. Utley,   Cavalier in Buckskin: George Armstrong Custer and the Western Military Frontier and this one on his Civil War amazing achievements titled ''Clashes of Cavalry: The Civil War Careers of George Armstrong Custer and Jeb Stuart'' by Thom Hatch. Interesting collection of recollections by Custer's soldier - J. H. Kidd, 'Personal Recollections of a Cavalryman With Custer's Michigan Cavalry Brigade in the Civil War' 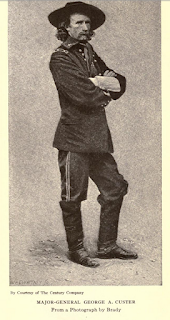 Surfing the net I found out that several years ago his saddle was on sale in 2012,
and I am attaching my compilation of the photos showing this saddle - that according to the description this was originally a McClellan saddle, remade by a saddle maker to general Custer's specifications. It was in the possession of the Custer family until 1941 and had only one previous owner.

Another, less elaborate, of Custer's saddles on the view here, with some interesting description.

And least we may forget, then here is the complete account of the Greasy Grass battle by Red Horse, Minneconjou Lakota Sioux, 1822-1907, done in 1881

Yet another historic saddle from the period that belonged to "Antelope" Ernst Baumann - a scout with the 7th Cavalry attached to Reno's unit during the Greasy Grass/Little Big Horn battle- saddle can be seen here.
enjoy
Posted by Dario T. W. at Sunday, December 11, 2016