Salve,
during the very last weekend of November 2015 I was invited, upon a word or two from Radoslaw Sikora,  to attended the special screening of a newly made para-documentary film about how the painting of Our Lady of Kodeń arrived at the Sanctuary in then central Polish Republic.

The screening took place inside the courtyard of the old but restored Castle of Gniew on the Vistula River. The crowd of viewers and invited quests was large and after a Catholic Mass said at the Castle's chapel we all went to enjoy the show.

The film was quite spiritual and uplifting, I daresay rather enjoyable production to many a viewer; alas perhaps a bit too short for my liking, the film nicely combined legend, history, historic narration with dramatized scenes, along with some magnificent camera work. Winged hussars were featured prominently in it, almost all actors were amateurs save for 3-4  who were professional screen actors.

Also, during the same weekend the Gniew Winged Hussar company held their Koło Chorągwiane [company/banner council] and then there was a great hussar company feastept  inside the castle. I slept in one of the ancient dormitories - seven bunk beds per one room, where Teutonic Order knights and soldiers might have slept until 1454(the first picture in this post shows the view from the 2nd floor dormitory window during that November weekend).
It was a t thoroughly enjoyable experience and I strongly recommend a visit there, especially during the warmer months, and the castle tourist office offers cruise trips along the Vistula River to various medieval castles located in the area of the Lower Vistula River.
I was honored to meet or revisit with some of the Gniew hussaria reenactors, however I met pan castellanus Jaroslaw Struczynski already at Kluszyn 2010 reenactment. 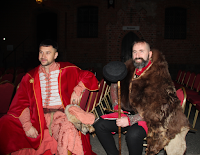 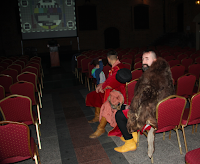 Finally, I enjoyed meeting castellanus Jedrek of Chojnik castle (great place to visit and full of legends), - all and all it was a great weekend, thanks to Radoslaw Sikora and Jaroslaw Struczynski - dzieki Panowie!

Enjoy
Ps
While being there  we went to view the old battlefield of the Gniew battle, but I will share my photos in one of my next posts ...
Posted by Dario T. W. at Tuesday, January 05, 2016

Wiesiu, winged hussar companion of the Gniew company, brought several long lances to the council, he makes them himself; they were one-piece, finished (painted and with a point) lances yet amazingly light, being more than 5 meters long. He also showed us the typical reenactment 'weapon' that is the shorter albeit heavier composite one.