Salve,
I am a big fan of the Crusades, and have been reading and researching about that period of Medieval history.
Last July 4 was also yet another anniversary of the battle of Hattin AD 1187 -  it was the most tragic disaster for the Crusader states of the Holy Land et al.

Modern view of the battlefield. 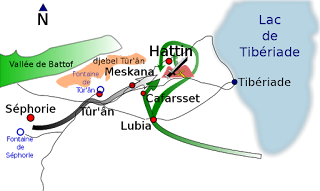 Dr Helena Shrader who has written many books on this period, wrote a blog entry on this battle that I quite like. Also  you can read her short stories about the most important companion of the medieval knight, his dextrarius or destrier stallion - the horse in question is Centurion, the mount of the famous knight of the Kingdom of Jerusalem, Balian of Ibelin.

Ad rem, Salah Ad-Din Yusuf ibn Ayyub, known as Saladin (Saudi Aramco has a long article on this ruler) and  the most famous Kurdish Muslim  warrior  of the Middle Ages, entrapped and then crushed the thirsty and demoralized army of the King of Jerusalem and his barons. After the battle 230 knights of the Templar and Hospitaller Orders were murdered by the scholars from the Saladin's entourage.
'De re Militari' site has this article that includes four accounts of the disaster, from Christian and Muslim sides, including one by William of Tyre.

This year the battle was reenacted in Galilee, Israel, in its original surrounding. This article has some interesting photos from this daring reenactment
enjoy
Posted by Dario T. W. at Monday, July 06, 2015

More about the legend of Saladin http://defendingcrusaderkingdoms.blogspot.de/2015/06/two-reviews-two-views-of-saladin.html